Limit Final Table Set to Shoot it Out 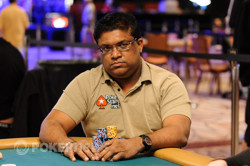 Victor Ramdin is in contention for his first WSOP gold bracelet

Well folks, that’s all here on Day 2 of Event 25: $1,500 Limit Hold’em Shootout. Fifty players have been whittled down to just ten and tomorrow will now see a final table fight it out for the $116,118 1st-place prize, all the glory and of course, the World Series of Poker gold bracelet.

At the start of the day, there were ten tables each playing five-handed and the goal was for just one player to remain at each table. The first elimination of the day was Greg Mueller on Table 408 and from there, all of the tables started losing players one-by-one.

Some of the players who succumbed to the rail early in the day include Ari Engel, Mike Leah, Jon Spinks and Tom Hang. The likes of Mike Thorpe, Scott Seiver and JJ Liu managed to last quite a while longer, but couldn’t make it to heads-up play at their tables.

The first player to prevail over his table was Brian Meinders, followed closely by Sean Rice and Matthew Schrieber. At this point, all the tables were down to just two players and half the field would be making their way to the final table. Brock Parker also made quick work of their table, as a few of the tables played slow.

A couple of the players who were part of all the heads-up fun were Justin Bonomo and Victor Ramdin and they happened to be at the same table. Ramdin started the heads-up battle with a chip lead and after a fierce contest of ups and downs, managed to take down the victory.

Quickly after Ramdin's victory, Preston Derden took down the win at his table over Millie Shiu. Christopher Hartman was the next player to win a table and secure a spot in the final ten and after that, only four remained.

It took longer than any of the other tables, but eventually Ian Johns was too strong for Hooman Nikzad and Daniel Walker fell to the might of Darin Thomas. Here's how the final table looks:

Each of the tables today had a slightly different amount of chips on them due to dead stacks and no-shows on Day 1, but as you can see, with the chips so close it is still anyone's game to win. It's all set to kick off at 1:00 PM tomorrow and PokerNews will be there every step of the way to crowning a shootout champion. Don't miss the fun! 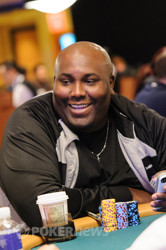 Darin Thomas - The Last to Advance

Darin Thomas has become the final player to advance to tomorrow's final table. After getting Daniel Walker down to a short-stack on the previous hand, Walker raised and Thomas snap three-bet. After more raises, Walker got his entire chip stack in the middle holding

. Thomas was ahead with

and hoping to finally end his long drawn out match here.

, pairing Walker's low card, but pairing Thomas' low card as well. Thomas' pair of jacks was leading and retained that lead through a

river. Thomas will be taking a stack of 155,500 into play tomorrow.

Daniel Walker is struggling at the moment. He recently lost a huge portion of his chips to Darin Thomas, courtesy of the following hand. Walker started up the hand by opening the button. Darin Thomas three-bet and a call from Walker would see a flop of

) was dealt. Walker called on the flop and turn, but raised it up on the river. Thomas made the call and the two players turned their hands over.

Thomas has Walker outkicked, raking in the pot and leaving Walker crippled.

Daniel Walker opened the button and a

flop was spread on the felt. Darin Thomas opted to check on the flop and then called the bet of Walker. When the

turn was dealt, Thomas again checked and Walker bet. This time however, Thomas put in the check-raise. It was enough to scare Walker away as he sent the pot to Thomas. When Thomas mucked his hand, he would fling them face up, showing

- or better known as queen high. 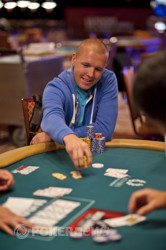 Hooman Nikzad had about 17,000 to start the hand and he got all of it in on a flop of

for top pair and a backdoor flush draw, but was ultimately behind the flopped set of Johns'

came on fourth and the

on fifth, allowing Johns to progress to the final table. Nikzad will take home $3,088 for his efforts.

Hooman Nizkad is need of some help, with a recent hand seeing him left crippled. Nizkad opened the button and Ian Johns called. Johns then checked in the dark as the dealer spread out a

flop. Nizkad opted to bet and Johns called as a

landed on the turn. This time both players would check and a

would complete the board on the river. This time Johns would lead and and Nizkad call.

When John tabled his

it was enough to take down the pot and take a handy lead.

Back from dinner and Darin Thomas has managed to gain some chips back off Daniel Walker. A recent hand saw the two players involved in a hand with the board showing

was strong enough to take down the pot and edge closer to his opponent's stack.

The final four players in today's event have returned from dinner to continue their respective heads up matches.