...And Pilgrim Doubles Right Back

Huy Quach opened to 45,000 from under the gun only to have Michael Aron three-bet to 115,000. It folded to Dwyte Pilgrim in the big blind who announced all in for 272,000 total. Quach got out of the way and Aron called.

Aron jumped way into the lead ont he

flop and it was just about all over for Pilgrim.

on the turn gave him outs to make Broadway if a queen fell on the river. Fortunately for Pilgrim, that's exactly what happened. The

peeled off on the river and Pilgrim became the winner of what once was a race. He's now sitting on about 640,000.

Dwyte Pilgrim made a raise to 53,000 from early position and JC Tran shipped all in from the small blind for 158,000 total. Pilgrim showed the

and was behind Tran's

The board brought the 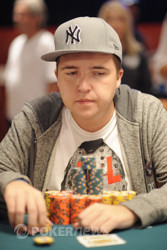 After being crippled in the last hand, Valentyn Shabelnyk raised all in for 125,000 from under the gun. He was called by Jonathan Poche in the big blind and the hands were tabled: 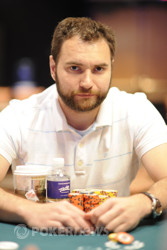 Tom Chambers opened to 45,000 from the hijack and Valentyn Shabelnyk called from the big blind.

The dealer pounded the table and dealt out a

flop . Shabelnyk checked to Chambers who continued out for 85,000. Shabelnyk tossed out a call and the

fell on the turn. Shabelnyk checked for a second time and Chambers opted to move 225,000 into the middle this time. Shabelnyk called once again.

Fifth street was the

and Shabelnyk checked. Chambers moved a massive bet of 900,000 to the middle. Shabelnyk announced a call and showed

Much to the heartbreak of Shabelnyk, he was behind the

of Chambers whose flopped two pair turned into a full house on the turn. Chambers is now the commanding chip lead of the tournament with 2,930,000.

Joe Cada opened to 42,000 from under the gun and was called by Tom Chambers in the hijack and Valentyn Shabelnyk in the big blind.

and Shabelnyk checked. Cada continued out for 82,000 and Chambers threw out a call. Shabelnyk mucked and we were heads up to the turn.

and Cada checked. Chambers bet 200,000 and Cada called to see the

fall on the river. Cada checked his option for a second time and Chambers waited a moment before moving 300,000 into the middle.

Cada announced a call and showed

but was behind the queens and tens of Chambers'

This hand was a huge hit to Cada, who began the day as the chip leader and is now sitting on 650,000.

Tom Chambers shoved from the hijack for 477,000 and was called by Valentyn Shabelnyk in the big blind.