2009 World Series of Poker Main Event champion Joe Cada raised to 42,000 from early position only to find Najib Kamand moved all in for 271,000 from the small blind. Cada called and the hands were tabled:

Cada kept his lead in this race on the

flop, but Kamand had gained several more outs for the win. Kamand paired up on fourth street when the

came and clinched victory when the

dropped down on fifth.

Action folded to Patrick Karschamroon who moved all in for his last 114,000 from the hijack. Jonathan Poche called from the big blind with

and was up against Karschamroon's

Karschamroon extended his lead on the

and kept it through the 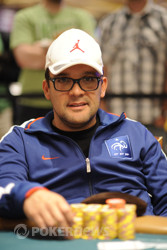 giving Andrews several outs for the win. She needed a queen, nine or spade but found none of those on the

turn. The river, however, obliged, by falling the

. Andrews was able to make her flush and send Thomas home.

Jim Kasputis Jr opened the betting with a raise to 50,000 from under the gun. It folded to the ever-aggressive Valentyn Shabelnyk in the cutoff who made it 90,000 to go. Kasputis called and the two saw a flop of

Kasputis led into the pot for 60,000 and Shabelnyk wasted no time announcing that he was all in. Kasputis called all in for about 740,000 and showed

completing the board. Kasputis was able to score a huge double up while bringing Shabelnyk back under two million.

Cherish This Double Up

Action folded to Huy Quach who raised to 38,000 from the cutoff. The button and small blind folded and Cherish Andrews moved a stack of 450,000, or enough to put Quach all in. Quach called with

and was racing with Andrews'

Quach jumped into the lead on the

flop and retained it through the 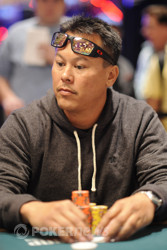 Valentyn Shabelnyk opened to 32,000 from early position and Jerrimie Pacheco moved all in right next to him for his last 130,000. It folded back to Shabelnyk who tossed in a call.

and Pacheco was unable to improve his hand, sending him home in 16th place.

Valentyn Shabelnyk raised to 32,000 from early position and Tom Chambers announced that he was all in from the small blind. Shabelnyk announced a call with the

and was behind the

Chambers kept the lead on the

completed the board and Chambers was able to double to 532,000.

"Fourth Quarter! We Back, Baby!" 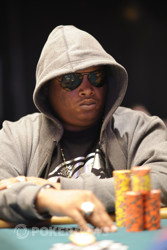 Cherish Andrews made it 33,000 from middle position and received one call from Dwyte Pilgrim in the hijack.

and Andrews continued out for a bet of about 50,000. Pilgrim called and the

fell on fourth street. Andrews checked to Pilgrim who pushed out 75,000. Andrews called and the

Andrews announced that she was all in, which put Pilgrim's tournament life at risk. Pilgrim called and showed

. Andrews mucked her hand and Pilgrim was able to score a key double up.

After the hand Pilgrim would tell us "Fourth quarter! We back, baby!". Pilgrim is now sitting on a stack of about 770,000. 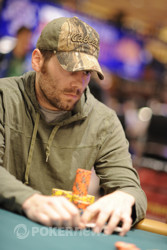 Jim Kasputis Jr raised to 42,000 from the button and Adam Kornuth shipped all in from the small blind for roughly 360,000, Kasputis called and the hands were turned up: