Here are the updated chip counts as of right now for this heads up duel:

The past few pots have been taken down before the flop. Either a raise to 200,000 from the button takes it down, or if that fails the three-bet to 500,000 has been the other method for victory. These two bet sizes have become the standard in this match and it's been six hands since we've seen a flop. 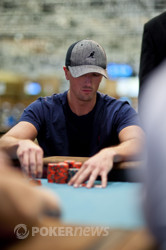 Joe Cada had the button and raised to 200,000. Carter Phillips three-bet from the big blind to 500,000 and Cada replied by moving all in. Phillips called and the hands were tabled:

Phillips paired his queen on the

flop and Cada was hunting for a king to end it here. Fourth street was the

, scoring a double up for Carter Phillips.

Joe Cada raised to 200,000 on the button and Carter Phillips called. The flop was

In the next hand, Phillips raised to 200,000 from the button. Cada three-bet to 500,000 and Phillips responded by moving all in. Cada mucked and Phillips took it down.

Joe Cada had the button and raised to 200,000. Carter Phillips called and the flop came down

. The board completed with the

. Phillips mucked his hand and Cada grabbed it.

We Are Heads Up 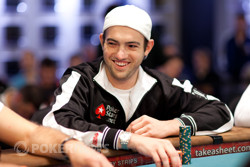 This is not the first time these two have tangled on the felt, either. Back in 2010 both players made a deep run in the 2010 PokerStars Caribbean Adventure $25,000 High Roller event. Joe Cada was able to win a race and eliminate Carter Phillips in 12th place. Cada went on to finish 11th in this event. 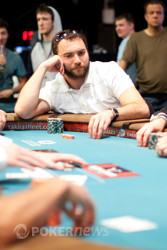 Carter Phillips raised to 200,000 on the button and Tom Chambers moved all in from the small blind. Joe Cada peered down at his hand and re-shipped over the top from the big blind. Phillips mucked and the hands were shown to the crowd:

Cada was in a huge lead with his kings and Chambers was in need of an eight or a miracle flop to give him the outs necessary to stay alive. The flop came

and was of no help to Chambers. The

rolled off on the turn and the

completed the board sending Tom Chambers home in 3rd place. 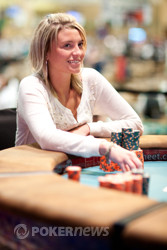 Joe Cada opened to 205,000 from the cutoff. Cherish Andrews shipped all in for about 1,900,000 from the button and it folded back to Cada who snap called.

Andrews kept her lead on the

flop. Cada was still searching for an ace or a king but instead the turn was the

, giving him four more outs to make the wheel.

The dealer pounded the table. The tension in the room was almost tangible as the dealer grabbed the top card in the deck and flipped it over.

Cada's rail absolutely exploded with shouts of elation while Andrew's friends merely hung their heads. Andrews will collect $210,083 in winnings. This hand propelled Cada into a massive chip lead.

Carter Phillips raised to 200,000 from the button and Joe Cada called from the big blind. The flop was