and Chambers was able to win the pot and triple up.

"I folded ace-jack," remarked a dejected Joe Cada after the hand. 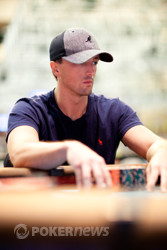 Tom Chambers opened in the cutoff to 225,000 and it folded to Carter Phillips who moved all in from the big blind for 2,440,000. Chambers called and showed

and we were off to the races.

Phillips jumped into the lead on the

flop by pairing his queen. It wouldn't be a race without a sweat, however, as the turn brought the

giving Chambers outs to make a straight. The river bricked out though, bringing the

This hand was a key double up for Phillips while crippling Chambers.

The final four players are now on a 20-minute break. 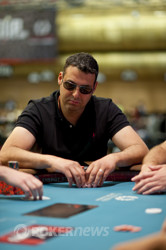 Carter Phillips opened to 160,000 from the button only to have Najib Kamand move all in for his last 1,350,000 from the small blind. Tom Chambers was in the big blind and also announced that he was all in. Phillips folded and the hands were shown:

and Kamand was one card away from elimination.

was of no help to Kamand and he was sent home in 5th place to find solace in his $153,578 in tournament winnings.

Phillips Takes it On Flop

Action folded to Carter Phillips' small blind and he completed his call. Najib Kamand checked his option from the big blind and the dealer put out a flop of

Phillips fired out a min-bet of 80,000 and Kamand shot his hand to the muck.

It's been a while since we've seen a hand go past the flop here. Carter Phillips is continuing to play the aggressor at the table, usually taking down a pot with the standard raise to 160,000 or folded when he gets three-bet.

Carter Phillips has been the aggressor as of late, moving his way from the shortest stack at the table to second in chips over the past half hour.

Carter Phillips limped before the flop and it folded to Cherish Andrews who checked her option in the big blind.

The dealer put a flop of

appeared on fourth street and Andrews checked for a second time. Phillips bet once again, this time making the magic number 350,000. Andrews called and we were off to the river.

came on fifth and Andrews checked for a third time. Phillips announced that he was all in for his remaining 990,000 and Andrews folded after pondering for a moment.