Taking Kamand of the Hand

Carter Phillips pushed out 120,000 on the button and received a quick call from Najib Kamand in the small blind. The big blind mucked and the flop fell

Both players checked the flop and the

turned. Kamand moved 160,000 into the middle and Phillips called.

struck the river and Kamand checked. Phillips pushed out a big bet of 445,000 and Kamand wasted no time by announcing that he was all in. Phillips folded and Kamand was able to take down a sizable pot. 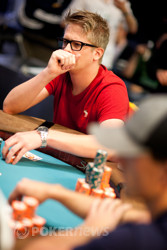 A short-stacked Maximilian Lehmanski moved all in from the hijack for his last 415,000 and Carter Phillips three-bet shoved on the button. The blinds folded and the hands were exposed to the world:

The turn gave Lehmanski some more outs when the

came, but it was to no avail as the

sealed his fate on the river.

Najib Kamand opened to 120,000 from the button when action folded his way. Tom Chambers three-bet to 325,000 from the small blind only to find Joe Cada push out a four-bet to 475,000. This was an insufficient amount to raise, however, and it was forced to be 530,000. Kamand got out of the way and Chambers called.

and Chambers checked to the raiser. Cada moved 370,000 into the middle and Chambers mucked, awarding the Main Event champ the pot.

Phillips Doubles Right Back Through Lehmanski 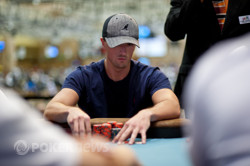 and was a favorite over Phillips'

The dealer showed them a flop of

and Phillips jumped into the lead. The

fell on the river to get his chips right back from Lehmanski.

Maximilian Lehmanski called on the button and Carter Phillips checked his option from the big blind.

The flop brought the

came on fourth and Phillips opted to lead out on this street with a 175,000 bet. Lehmanski pushed out a call.

fell on the river and Phillips moved all in, having Lehmanski covered. Lehmanski called all in and showed

for a flush. A dejected Phillips flipped up

for a lower flush, causing Lehmanski's rail to go nuts.

Najib Kamand open-shipped all in for 600,000 from the cutoff and Tom Chambers moved all in over the top from the button. The rest of the table folded and the hands were shown:

. Kamand was now in a commanding lead and kept it with the 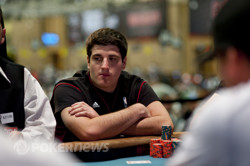 Cherish Andrews opened to 125,000 from early position and Michael Aron replied by moving all in for about 1,200,000 from the cutoff. It folded to Joe Cada in the big blind and after a moment he announced that he was all in as well. Andrews folded and the hands were tabled with Aron's tournament life on the line:

on the turn, sealing Aron's fate. The meaningless

came on the river and Aron was sent home in 7th place.

Andrews Takes Some From Chambers

Tom Chambers raised to 150,000 from the cutoff and received a call from Cherish Andrews in the big blind.

The flop brought the

. Both players checked on this street and they did the same on the

for a pair of jacks and scooped the pot.