Lehmanski Takes It On Turn

and Chambers led out for 100,000. A call from Lehmanski landed the

turn. Chambers checked it to Lehmanski who took down the pot with a bet of 135,000.

Huy Quach opened to 75,000 in middle position and Carter Phillips three-bet to 180,000 from the cutoff. Action folded back to Quach who called, landing a

flop. Both checked and did the same through the

, but that was second best to Phillips'

Jim Kasputis Jr. shoved for 445,000 from early position and was called by Huy Quach in the hijack. 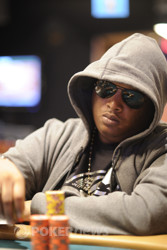 We caught Huy Quach raise before the blind only to have Dwyte Pilgrim three-bet. Quach moved all in for around 700,000 and Pilgrim called.

The flop was a heartbreaking one for Pilgrim, as it gave Quach a set when it fell

fell on fourth and Pilgrim was looking for one of the two remaining queens to win the hand.

on the river was of no help and Pilgrim was crippled.

against Michael Aron's pocket fours. Aron also flopped a set on Pilgrim and he was sent home in 11th place, just one spot shy of the unofficial final table.

Cada Back In It

Najib Kamand opened to 70,000 from the cutoff and action folded to Joe Cada's big blind. Cada peeked at his cards and then shipped his entire stack in for about 300,000. Kamand called and the hands were turned up:

Cada grabbed hold of the lead hard on the flop of

by flopping a set of fives. The

then rolled off on the turn, giving Cada quad fives and a double up.

completed the board on the river and Cada grabbed a nice sized pot.

Pilgrim Gets a Double Through Aron

Action folded to Dwyte Pilgrim in the cutoff who tossed out 65,000. Michael Aron announced all in from the big blind and Pilgrim called off his last 505,000.

Aron kept his lead on the flop of

flop but Pilgrim turned the

, pairing his jack and putting him in the lead. The river was the

and Pilgrim was able to score a double.

Jonathan Poche moved all in preflop for 405,000 and was called by Jim Kasputis Jr in the big blind.

Poche found gold on a flop of

and kept his lead through the