Joe Cada was the big story coming into today, but after losing a few large pots early he has been relatively quiet. Cada hasn't really played a significant hand in the past twenty-five minutes. He's currently sitting at about 320,000.

Kamand moved all in for 986,000 total and Kasputis mucked his hand. Kamand showed

A Double For Quach

Maximilian Lehmanshi flat called on the button and Huy Quach completed from the small blind. Michael Aron checked his option from the big and the dealer put out a flop of

. Quach led out for 35,000 and Aron mucked his cards straight away. Lehmanski called and the

Quach checked and Lehmanski moved him all in. Quach called all in for abotu 259,000 and showed

"You win," said Lehmanski, mucking his hand and giving Quach double up chips. 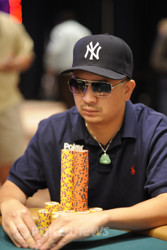 A short-stacked JC Tran shipped all in for 54,000 from the button and Michael Aron called from the big blind.

Aron jumped ahead on the

and Tran needed a heart or a king to double up. Unfortunately for Tran, the turn and river came

, eliminating him from the tournament.

Cherish Andrews opened to 50,000 from under the gun and was called by Huy Quach on the button and Michael Aron in the big blind.

and Aron checked to Andrews who fired 75,000. Quach called and Aron got out of the way.

and both players checked to see a

river. Andrews pushed 225,000 into the middle and Quach called but mucked his hand when Andrews showed

JC Tran moved all in from the hijack for 35,000 and was called by Maximilian Lehmanski from the big blind.

Tran paired up on the 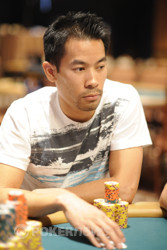 Patrick Karschamroon open-shipped all in from the cutoff of 191,000 and was called by Najib Kamand in the big blind.

Andrews Takes Some of Tran's Stack

Cherish Andrews opened to 50,000 from early position and was called by JC Tran from the big blind. The flop fell

and Tran checked to Andrews who continued out for 75,000. Tran mucked his hand and Andrews grabbed the pot.

JC Tran opened to 55,000 from under the gun and it folded around to Huy Quach who called from the big blind.

and Quach checked to Tran who continued out for 65,000. Quach called and the

Quach checked for a second time and Tran moved out a bet of 92,000. Quach announced that he was all in and Tran tanked for about a minute before tossing his hand into the muck.