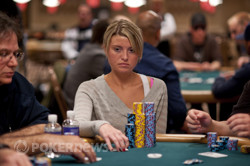 Day 1 of Event 31: $1,500 No-Limit Hold'em is officially in the books. The players have bagged and tagged and the player on top is Cherish Andrews who finished the night with an unbelievable 225,900.

This event drew a remarkable 2,811 entrants which is a 311 player increase from last year's turnout. This event also marks the largest field for a $1,500 No Limit Hold'em event thus far at the 2012 World Series of Poker (excluding the $1,500 Re-Entry).

Players today trudged through a lengthy eleven levels of play and 331 players will return tomorrow in their quest for a WSOP bracelet. We're a mere 34 eliminations away from the money and after that each remaining player is guaranteed at least $2,770. Although a min-cash is always a respectable finish, each player is eyeing up the $664,130 first place prize.

With the sheer size of this field it was inevitable that we would see a large number of eliminations today. Among those who were not fortunate enough to make Day 2 were David Williams, Jennifer Leigh, Dutch Boyd, Kara Scott, Nacho Barbero, Matt Affleck, Greg Raymer, Viktor Blom, Melanie Weisner, and many many more.

Also to hit the rail today was two-time bracelet winner Andy Frankenberger. Frankenberger won his first bracelet in this event last year but unfortunately was not able to make Day 2 this year. Frankenberger also received his second bracelet this year when he was able to defeat Phil Ivey heads up in Event 17: $10,000 Pot-Limit Hold'em.

Cards will be in the air for Day 2 at 1:00 PM. Join us for all of the latest updates as we approach and breach the money bubble and the quest for the next World Series of Poker champion continues!

End of the Night Counts

Tournament floor staff has announced that we will play three more hands tonight before bagging and tagging.

With the board reading

we found Cherish Andrews facing a bet of 4,200 from her opponent. Andrews dipped into her stack and tossed out a call, showing

. Her opponent picked up his hand and flung the cards to the muck.

Action folded around to the player on the button who moved all in. Phil Collins called out of the small blind and the big blind got out of the way.

giving numerous outs to Collins' opponent. Fortunately for Collins, the

river were not any of them. Collins was able to reduce the field by one and virtually double up his own stack.

We caught the remnants of a hand that cost 1995 WSOP champion Dan Harrington most of his stack. A player moved all in against Harrington on a

and was way ahead of his opponent's

and his opponent was looking for one of the two remaining fives going to the river. Just like that the dealer rapped the tabled and peeled off the

, absolutely destroying Harrington's stack. After that hand he was left with only 2,200.

Chip Counts at the Level Up