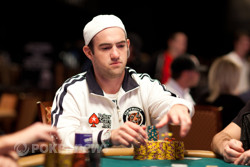 Less than 48 hours ago, 2,811 different people took their seats in various rooms at the Rio with the dream of being the next World Series of Poker champion. Now, after two days and 21 grueling levels of play, only 19 remain. Leading the field is none other than 2009 Main Event champion Joe Cada who is holding on to a stack of 1,869,000.

Today's play saw 331 runners return to the felt and 297 of those made the money. Among those to grab on to a cash and bust before play ended today are Eric Baldwin, Lauren Kling, Nick Binger, Mohsin Charania, Angel Guillen, Ted Forrest, Erika Moutinho, James Akenhead, Soi Nguyen, and PokerNews' own Chad Holloway.

No Main Event champion since Carlos Mortensen in 2001 has been able to win a second WSOP bracelet to go along with their Main Event title. If Cada can best the remaining players tomorrow he will become the first Main Event winner of the past decade to put a second bracelet on his wrist.

Play will resume at 1:00 PM tomorrow in the Amazon Room where the final 19 players will battle on the felt for the next WSOP gold bracelet and $664,130 in first place money. Join us as we provide all of the latest updates from the tournament floor!

"We Have a New Chip Leader!" 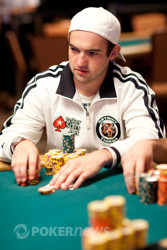 A monster pot in the last three hands of the evening has propelled Cada to the top of the counts.

Loeser called all in immediately for about 750,000 with

and held a big lead on Cada's

. However, the board rolled out

as Cada spiked the ace on the flop to not only eliminate Loeser, but take the chip lead in the process.

Tournament staff has announced three more hands before bagging and tagging for the evening.

Alvaro Santamaria moved all in preflop and was called by Carter Phillips. Santamaria tabled

but was behind the

and Santamaria was sent packing.

Tom Chambers opened to 30,000 under the gun and Baret Grigorian moved all in for 126,000 from the next seat. Adam Kornuth re-raised all in from the cutoff, successfully isolating the pot.

The flop and turn fell

Kornuth spiked the river to score the elimination.

to give Andrews a pair of queens to score the elimination.

A series of raises preflop led to Vincent Lucardie all in for about 300,000 with pocket tens against Joe Cada's

. Lucardie found no help from the board and was sent to the rail.