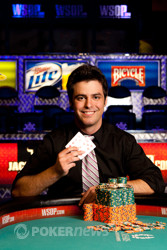 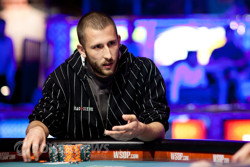 In what would be the final hand of the tournament, Max Steinberg limped from the button and Samuel Gerber checked his option from the big.

and Gerber checked to Steinberg, who bet 100,000. Gerber immediately moved all-in for his last 1.7 million and Steinberg deliberated a while, but eventually made the call.

Gerber looked clearly dejected to see he was drawing to just two outs, as a four and a four only would allow Gerber to survive.

It wasn't meant to be, however, as the

river bricked out for Gerber and he was eliminated in 2nd place.

Max Steinberg has slowly been grinding Samuel Gerber down since the last posted hand, however, Gerber was able to find a small rush to get some chips back.

In the first hand, Steinberg raised to 225,000 and Gerber re-raised all in for his last 1.7 million. Steinberg folded and Gerber scooped the pot.

In the very next hand, Gerber open-shoved all in and Steinberg mucked.

In the third hand, Steinberg again raised to 225,000, Gerber went back over the top all in and Steinberg folded.

Gerber still has a long way to go, however, as Steinberg still has more than a 2-1 chip advantage over him.

Max Steinberg raised it up to 225,000 from the button and received a call from Samuel Gerber in the big blind. The flop came

on the turn lead to both players knuckling.

on the river saw Gerber fire out 375,000. Steinberg then took his time before making a raise of 1,065,000. Steinber got out of his chair in distress, sat back down and made the call.

for two pair sixes and threes. Gerber mucked and Steinber took down the substantial pot.

Heads-up play has been surprisingly clockwork since break ended. Almost every single hand has consisted of the player on the button raising to 225,000 and the player in the big blind folding.

Stay tuned - something noteworthy is bound to happen eventually.

Players are now on another 20 minute break.

Max Steinberg raised it up to 175,000 from the button and received a call from Samuel Gerber in the big blind. The flop came

and Gerber checked. Steinberg opted to bet 200,000 and quickly found himself being raised by Gerber who mandated 500,000. A few moments passed before Steinberg put out a three-bet of 1,000,000. Gerber eventually folded after thinking it through a little bit.

The action has been slow since heads up began. Both players are clearly picking their spots before committing too many chips. However, with the blinds set to rise again in just a few minutes - it is only a matter of time before the action picks up.