Hans Winzeler has been hamstrung on the teeny stack since he lost his chips to Naoya Kihara. He has been was looking for an opportunity to shove but it just hasn't materialise. Eventually, he found himself in the big blind with just 110,000 in front of him and after Kiraha raised on the button he had to move all-in and did, Kiraha made the call.

Winzeler flopped a straight and was a sure fine hit to double up.

The turn card gave Kiraha some hope with a five or a king giving him a full-house.

Winzeler doubled up and he received a cheer from his rail.

Can Anyone Stop Kihara? 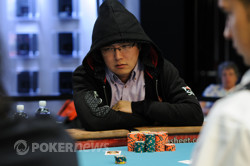 Naoya Kihara is charging towards winning Japan's first bracelet, and now has more than half the chips in play.

flop where both players checked.

Winzeler called both times and then mucked upon seeing his opponent's

for the flopped wheel.

A Trio of Pots For De Maci 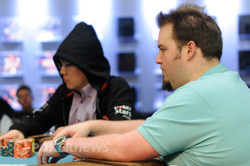 Daniel Hindin raised from the cutoff and De Maci made the call in the small blind. The action was checked through to the river on a board of

Then De Maci raised to 65,000 from the cutoff, Hans Winzeler called on the button as did Naoya Kiraha in the big blind. Once again the action checked through to the river, this time on a board of

Finally, De Maci raised to 65,000 on the button and Winzeler called in the big blind. The flop was 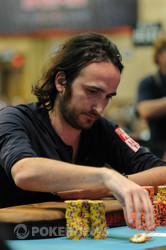 It took a monster pot and a man from Japan to oust one of the favorites for this title, Davidi Kitai.

Kitai opened to 60,000 from under the gun and Naoya Kihara three-bet to 210,000. Kitai wasn't to be removed and raised the pot. This took a few minutes and about ten people to figure out it was up to 660,000. Kihara surprised a lot of people by just calling.

giving both players the same straight. Kihara was free-rolling to a better straight though. He needed a ten and that's what he got as the river came

to give him the winning straight. Kitai looked as if he'd just been stabbed in the heart.

We are averaging five-minutes in between flops at the moment, and here are the last three.

Hans Winzeler raised on the button and Naoya Kihara called in the big blind. The flop was

Kihara limped into the pot from the small blind and Chris De Maci checked his option. The flop was

Finally, De Maci bet 65,000 from the button and Davidi Kitai defended his big blind. The flop was

and both players checked. De Maci picked up the pot with two-pair holding

and Kitai mucked his hand.

The players are on a twenty-minute break 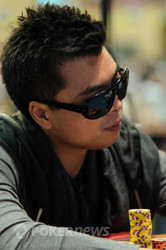 Tommy Le was eliminated on the last hand of the break in a battle of the blinds versus Chris De Maci.

The action folded around to De Maci in the small blind, and he limp-called Le's pot-sized raise from the big blind.

and Le bet 144,000 when the action checked to him, and then called all in when Di Maci shoved.

for top and bottom pair.
Le:

for inside straight draw and flush draw.

to fill De Maci up and he ran off to celebrate with his rail.