With Level 24 coming to a close we are still yet to lose a single player on the final table. In fact the action has been very limited. Here are a few hands.

Nayoa Kihara raised to 84,000 in the cutoff and Chris De Maci called on the button. The flop was

Daniel Hindin raised to 50,000 from under the gun, Chris De Maci called in the cutoff as did Hans Winzeler in the big blind. The flop was

Lastly, Hans Winzeler raised to 48,000 on the button and Nayoa Kihara called in the big blind. The action checked through to the turn on a board of

where Kihara bet 90,000 and Winzeler called. The river was the

and this time Kihara checked. Winzeler took his time, bet 160,000 and it was enough to win the pot.

The action had been very slow for a couple of orbits. Very little playing back, and very little post flop action.

Davidi Kitai, for one, must've been getting a little board. Hence.....

Winzeler wasted little time in throwing his cards into the muck, only to be shown

by the cheeky Belgian.

A Great Orbit for Kitai

Hans Winzeler raised to 48,000 in first position, Kihara called in the cutoff as did both blinds. The flop was

Then Davidi Kitai won the next four hands in succession after uncontested 48,000 raises.

Hindin Doubles into the Lead

What a turnaround for Daniel Hindin! He just doubled through Naoya Kihara and over took him at the top of the counts.

The hand started with a Hans Winzeler button limp, a Hindin complete, and a check from Kihara in the big blind.

for nut-flush and straight outs.
Kihara:

to make Hindin's flush. He still had to avoid full house outs and managed that as the river fell

The chips are really evening up making this anyone's game now.

Le and Winzeler Apply Some Pressure

Then Davidi Kitai raised to 44,000 in the cutoff, Hans Winzeler called on the button and this brought Naoya Kihara into the hand from the big blind.

Three-Way Action to the River

Chrid De Maci opened the pot to 42,000 from under the gun and was called by Tommy Le and Davidi Kitai from the next two seats.

All three checked the

turn. Both opponents called again. All three thwn went back to their checking ways on the

and took the pot as Le and Kitai folded.

Naoya Kihara raised to 70,000 from first position and Davidi Kitai peeled from the button. The flop was

and this time Kihara decided a little bit of pot control was in order; he checked, Kitai bet 165,000 and Kihara called. The river card

was checked through and it was time for a showdown.

Both players had straights, but Kihara's was slightly higher and he took down the pot.

There are 19 minutes left of this level. The players have been introduced and play is back underway. 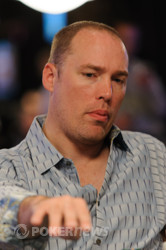 We're at the official final table of six after the elimination of Scott Bohlman. Hans Winzeler came second in this event last year and he confirmed a return to the final table this year after it was he who busted Bohlman.

Bohlman raised to 70,000 from second position and Winzeler was the only caller to the

Winzeler check-bet-pot after Bohlman bet pot himself. That was enough to set Bohlman all in. Call.

for the flopped straight, and redraw to a flush.

Bohlman was in bad shape and he didn't improve through the