Scott Bohlman has been card dead all afternoon when he was in desperate in need of a double up. Eventually, with his stack as low as 96,000, he picked up a hand in the small blind and decided to go with it. Naoya Kihara was seated in the big blind and obliged to give Bohlman the chance to double up or finish in 8th place.

"Have I won?" Asked a very calm looking Bohlman. 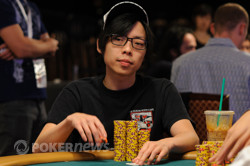 He managed to double up once, the next time didn't work out too well for him.

He (big blind) and Davidi Kitai (small blind) got all the chips in when the action was folded to them. Cheong had less than 150,000 chips at that point.

Running diamonds did it for Cheong, and he busted.

Chris De Maci and Naoya Kihara have tangled a lot today, and continue to do so.

for a straight and De Maci mucked.

A few hands later the two were all-in on an

Is the pressure starting to get to the inexperienced Naoya Kihara? After a quick start the last few pots have not gone the way of our chip leader and that has climaxed with a big loss to Chris De Maci.

We joined the action with a bet of 124,000 splayed in front of Kihara in the big blind. De Maci was seated in first position and he had decided to re-raise 'pot'. The dealer and the two players were trying to work out the exact total when the two players agreed to play for stacks. On your backs gentlemen.

Kihara had turned a straight but De Maci rivered a flush for a huge double up. 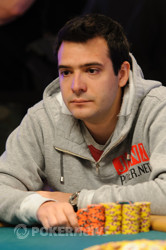 In the very first hand of the day, Daniel Hindin, doubled up Joseph Cheong, and the outcome was a mere 86,000 chips in the stack of Hindin. As we reached the end of the level 20 he is sat with 740,000 chips courtesy of a lot of clever play, hard work and the elimination of Dimitar Danchev.

Hindin had already doubled through Danchev before the pair decided to hold a rematch. We are not sure the flow of the action.

So a set of nines for Hindin and Danchev became our 10th place finisher.

Doubles Doubles, All Over The Place

Davidi Kitai raised from under the gun and was called by Tommy Le on the button before Daniel Hindin raised the pot from the small blind. Dimitar Danchev was in the big blind and raised the pot again. This was enough to force out Kitai and Le, before Hindin, who had committed most of his stack already, called.

and De Maci was delighted with his fate in the hand.

Chris De Maci has just doubled up Jason DeWitt and then doubled up himself through Naoya Kihara.

De Maci raised to 28,000 on the button and DeWitt made the call. The action checked through to the turn on a board of

and all the money went into the middle courtesy of a DeWitt check-raise and De Maci shove.

So De Maci was facing kicker problems with one card to come. That card was the

Then a few hands later Kihara raised on the button, De Maci raised pot (96k) and Kihara called. The flop was

gave De Maci a pair of queens and he doubled up. 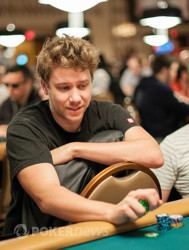 What an horrific start to the day for Kevin MacPhee. He arrived late after crashing his car in the Rio car park, the last thing you want to do when nursing the short stack. Then he gets to his seat and Joseph Cheong was in no mood to show him any sympathy when he took him out in the first fifteen minutes.

MacPhee min-raised from under the gun, Cheong raised the 'pot' from the cutoff (which put MacPhee all-in) and MacPhee made the call.

MacPhee sinks and Cheong takes his second double up and now has 364,000.