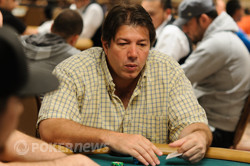 419 players contributed to a prize pool of $1,969,300 and by the end of the day that field had sweated itself down to 72 players. The Commander and Chief of the bracelet pursuing pack was David Benyamine who finished the day with 248,300 in chips.

The bigger the prize pool, the more familiar the faces get, and today's field was littered with the glitterati of poker. One face that we thought we recognized, but was stuck on top of a new shiny body, was the 2011 World Series of Poker (WSOP) Player of the Year (POY) Ben Lamb. Lamb had lost that much weight it was lucky that there was a huge poster of him adorning the walls of the Brasilia Room to help us recognise him. Lamb started well - doubling up in the first few hands - and after a lull really started to motor, unfortunately he ran into a man on form. Joseph Cheong did most of the damage before David Colin came in for the kill. Lamb promised plenty but eventually died out in the last level of play.

Ben Lamb is a WSOP bracelet holder, and there were two more bracelet holders sharing a table right from the get-go. Erik Cajelais and Leif Force doing battle in the Gold Section of the Brasilia Room, and it was Force with the upper hand. Then along came Jack Melki and he decided that the table was not big enough for the three of them. In the blink of eye, both bracelet holders were out and Melki had 70,000 chips and the chip lead. Not bad for a players who had never cashed outside of his native France - and the blinds were only 100/200!

Early notable bust outs included our reigning champion Jason Mercier, John Racener, Vanessa Selbst, Jonathan Duhamel and Phil Galfond. At the right end of the chip counts Davidi Kitai, Luke Schwartz and Don Nguyen. They were all beating on the Jack Melki door but the Frenchman seemed to be built of stern stuff.

Phil Ivey had pre-registered for this event, but had to skip it while he continued his assault on Event #32: $10,000 H.O.R.S.E. He made the final table, lying 3rd in chips, and waltzed into the Brasilia Room during his break. By that time his chip stack had reduced to 8,700 chips and he played one hand, doubled up and then headed back to his seat in the glare of the Amazon Room Final Table…just a typical day in the life of Phil Ivey!

As the tables broke for the scheduled ninety-minute dinner break there were two people who just didn't want to stop playing. Kevin Boudreau and Don Nguyen had somehow managed to put their tournament lives on the line - and create a 110,000 pot - holding just a pair of nines and ace-high respectively. Boudreau held

and Nguyen joined became one of the chip leaders holding just ace-high!

After the break it all started to go very wrong for Jack Melki. Like a snowman in the Las Vegas heat, he just melted away. He was battered by Naoya Kihara and Shaun Deeb, and in the end a very tired Melki departed a long way off the money; Naoyo Kihara the vanquisher. Kevin MacPhee, David Burn, Ben Lamb & Tommy Le all moving silently towards the better end of the counts.

Todd Boghosian eliminated the dangerous Viktor Blom, Rory Matthews finished off Sam Stein and Phil Ivey's stack eventually ended up in someone else's stack. During another break from the H.O.R.S.E tournament, Ivey returned to find

only to run them into the

of Bruno Fitoussi. An

on the flop sending Ivey out of the competition he was never really involved with in the first place.

As we moved into the twilight of Day 1 multiple WSOP bracelet winners Daniel Negreanu and Bertrand "ElkY" Grospellier left the competition, as did our current World Series of Poker Player of the Year leader Andy Frankenberger. At the top of the counts a great battle started to emerge between Karim Jomeen, Shaun Deeb, David Benyamine, Scott Bohlman, Kevin MacPhee and Naoya Kihara for the number one spot, but in truth there were around fifteen-players all in with a shout of that coveted chip leader position.

After the final few hands were done and dusted, the player who emerged with the lead was David Benyamine who must have had a growth spurt in the final level to accrue 248,300 chips. He will return with 71 other hopefuls at 13:00 PM where we will commence Day 2 of this fabulous event. Please make sure you join us at PokerNews for all of the action. 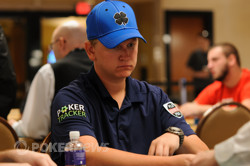 Ben Lamb is out

Ben Lamb is no longer in this competition and his chips sit in the stack of David Colin. We didn't see the hand but Colin now has 190,000 to take him into the chip lead race.

Level 8 Round Up: Jomeen Leads

Fabrice Soulier has just rivered a baby full-house to move up to 135,000. The board was

and Soulier's opponent in the small blind had made a value bet of 14,000 before Soulier popped it up to 35,000. The call was made and Soulier tabled

for the winning hand.

Joseph Cheong seems to have turned the tables on Ben Lamb. Cheong now sits on 144,000 whilst a rather red-faced Lamb has dropped to 67,000. But the biggest movers in the game are Shaun Deeb and Karim Jomeen. The man who was taught how to play poker by Grandma Deeb is sitting on 190,000 chips whilst Jomeen is the first man to breach the 200,000 barrier with 225,000 chips.

Here are two pots involving losses for Joseph Cheong and Kevin MacPhee and news that Chris De Maci is the new chip leader with over 160,000 chips.

The pre-flop action had already been completed by the time we reached the table. The flop was showing

, Joseph Cheong checked from the small blind, David Colin made it 4,100 from under the gun, Ben Lamb folded and Cheong made the call. The turn was

and both players checked so we saw the

Then on a board of

Kevin MacPhee led both flop and turn for 2,500 & 5,200 respectively and his opponent called each time. Then on the river

MacPhee check-called a 18,500 bet and mucked his hand when he saw

Negreanu Out; Lamb and Cheong Having a Ruck

Daniel Negreanu is inconspicuous by his absence. His table has broken and so we are not sure how his tournament ended, but do know - courtesy of his twitter account - that he did lose top set against a rivered straight (

board) sometime during Level 8.

Ben Lamb and Joseph Cheong are having some fun battering the hell out of each other. The pair are involved in pot after pot and judging by the chip stacks Lamb seems to be having the better of the exchanges. Here is one of those duels that ended in a split pot.

Lamb opened from the hijack, Cheong flicked out a quick three-bet on the button and Lamb called. the action checked through to the turn on a board of

and Cheong called a 5,400 Lamb bet. On the river the pair saw the

Both players had the same straight and the pot was shared.

The players are on their final twenty-minute physical needs break of the day.

World Series of Poker (WSOP) bracelet holder Sam Stein is out; eliminated at the hands of Rory Matthews. Stein was down to his last few thousand when he opened for 2,100, the button called, Matthews raised pot (9,000), Stein called and the button folded leaving the pair heads-up.

Matthews with two-pair and Stein was out.

We reported earlier that our former chip leader, Jack Melki, was free-falling down the leader board, and we can now report that he has hit the bottom hard and he won't be getting back up.

He opened to 2,000 in the cutoff before Naoya Kihara three-bet to 6,900 on the button. Melki didn't even think before making the call and they both shared a flop of

It didn't matter what the price was because Kihara moved all-in.

finished off the board and Kihara had eliminated the man who had 70,000 chips when the blinds were only 100/200.

That hand placed Naoya Kihara on an impressive looking 108,000, but that was nothing compared to Joe Monro. Monro with fourteen WSOP cashes on his record has somehow amassed 152,000 chips.