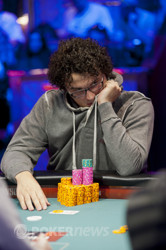 From under the gun, Erik Cajelais raised. Action moved to Joep van den Bijgaart in the big blind and he thought for a few moments before raising. Cajelais called.

, both missing van den Bijgaart and sending him to the rail in fourth place.

On the flop, Tryba bet out and van den Bijgaart called. The turn was the

From under the gun, Joep van den Bijgaart raised and Salman Behbehani called from the big blind. The flop was

and both players checked. They also checked the

Salman Behbehani raised from under the gun and Erik Cajelais reraised from the small blind. Behbehani called and the flop came down

From under the gun, Chris Tryba raised. Salman Behbehani reraised on the button and Tryba called.

. Tryba checked and Behbehani bet. Tryba called and the turn was the

and Tryba checked. Behbehani bet and Tryba folded his hand.

Action folded over to Chris Tryba, who completed from the small blind. Salman Behbehani checked his option from the big blind and it was heads-up going to the flop.

Both players checked to see the a turn, which brought the

. Tryba checked again, prompting a 18,000 bet from Behbehani. Tryba made the call.

completed the now double-paired board and Tryba checked once more. Behbehani fired 53,000 and was met with an all-in from Chris Tryba for about 400,000. Behbehani revealed a

for threes-full of nines and mucked his hand. 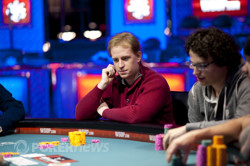 Action folded to Salman Behbehani on the button and he raised to 35,000. Michael Gathy reraised all in for 266,000 from the small blind and Behbehani called.

and kept Behbehani in front. The turn was the

. Behbehani won the pot with a full house, sevens over sixes, and sent Gathy to the rail. 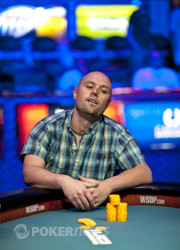 Samuel Golbuff open-raised all in for his last 44,000 from early position and action folded over to Joep van den Bijgaart in the big blind, who called to put Golbuff at risk.

Golbuff was dominated going into the flop and would need help to survive. However, the

board kept Golbuff second-best and he was sent to the rail in 6th place.

Action folded to Salman Behbehani in the small blind and he raised. Michael Gathy called out of the big blind and the flop came down

Behbehani announced that he had an underpair and Gathy showed the