Samuel Golbuff check-called a bet on the

board before checking in the dark before the dealer dealt the river. The river was the

and Tryba checked behind.

for a pair of nines, but was bested by the

for Tryba and he won the pot.

Samuel Golbuff made it two bets from the button and Salman Behbehani three-bet from the big blind. Golbuff flatted to see a flop, which came

Golbuff proceeded to call a bet from Behbehani on the flop,

for aces and fives. Golbuff couldn't beat it and mucked his hand without showing. 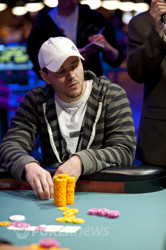 From early position, Samuel Golbuff raised to 25,000 and then Brent Wheeler tank-shoved from the hijack seat for 161,000. Action folded back to Golbuff and he requested a count. Golbuff had 155,000 behind, which meant he had Wheeler covered by a little bit. Eventually, Golbuff called.

and was in dominating shape to double up with the

The flop and turn kept Wheeler in front with the

on the river smacked Golbuff with the winner and sent Wheeler to the rail.

Two in a Row for Gathy

From under the gun, Michael Gathy raised to 25,000 and Erik Cajelais called from the hijack seat. Everyone else folded and the flop came down

On the next hand, Joep van den Bijgaart raised to 25,000 from under the gun and Michael Gathy called from the big blind. The flop came down

Tryba Comes Back Over the Top

Erik Cajelais min-raised to 24,000 from under-the-gun and action folded over to Chris Tryba in the cutoff, who three-bet to 58,000. It was folded to Michael Gathy in the small blind, who, after some deliberation, four-bet to 116,000. Cajelais quickly folded and action was back on Tryba, who moved all-in for 324,000. Gathy tanked, but eventually flicked his cards into the muck one-by-one and Tryba scooped the sizable pot.

Improve Your Poker Performance with BluffCam 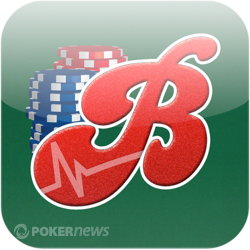 Looking for ways to improve your poker face? With BluffCam, you can now understand how your body acts over the course of a poker game, and get the added edge over your opponents.

The app utilizes proprietary camera technology to measure your heart rate through micro-changes in the color of your skin. The technology is working and players are taking note.

Partnered with some of the top players in the WSOP, BluffCam is dedicated to bringing players of all levels one step closer to the perfect bluff.

Williams Reynolds, professional poker player and winner of the 2010 PCA High Roller event says, "I'm so impressed by how easy to use and accurate BluffCam is. This is super smart technology, and I can now keep my bluff frequency high by keeping my heart rate low with BluffCam!"

BluffCam is the ideal poker companion for anyone looking to stay cool when it counts most. Download it now in the app store!

Our remaining seven players have returned to their seats and cards are back in the air!

Players are now on their first 20-minute break of the day.