Michael Gathy open-raised from the cutoff and Samuel Golbuff three-bet from the big blind. Gathy flatted and the flop brought

A very short-stacked Golbuff led out and and Gathy raised, which was enough to put Golbuff all in. Golbuff called to put himself at risk and hands were revealed.

Golbuff was ahead with king-high but would need to fade a lot of outs to survive. The

Action began with Joep van den Bijgaart, who made it two bets from early position. It was folded around to Samuel Golbuff in the cutoff, who made it three bets. Not to be outdone, Salman Behbehani then made it four-bets from the big blind. Bijgaart gave his hand up, but Golbuff made the call.

. This time, Behbehani went on the defensive and check-called a bet from Golbuff.

landed on the river and both players checked. Behbehani tabled

and mucked his hand.

Golbuff is down to just 90,000 following the hand. 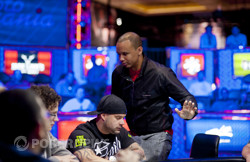 After folding for three hands after getting crippled, Phil Ivey stuck his last 7,000 in from under the gun. Action folded to Michael Gathy on the button and he called. Joep van den Bijgaart called from the small blind and Erik Cajelais checked from the big blind.

before getting to a showdown.

"I looked at an ace," announced Ivey as the players started turning over their hands.

for a pair of sevens, van den Bijgaart the

for two pair and then Ivey had the

. Ivey did have an ace, but the three that came with it wasn't what he needed to stay alive and he was eliminated in eighth place.

Ivey was quickly out the door and we'll surely see him soon in another event at the World Series of Poker.

Action folded to Samuel Golbuff in the cutoff seat and he raised. Chris Tryba called from the button and the flop came down

turn card, Golbuff checked and Tryba bet 72,000. Golbuff gave it up and Tryba won the pot. 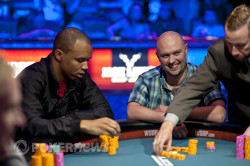 Action folded to Phil Ivey in the cutoff seat and he raised to 20,000. On the button, Samuel Golbuff reraised all in for 159,000. The blinds folded and Ivey quickly called.

Ivey turned over the

and was way ahead of the

The flop came down an interesting

, giving Golbuff a pair and a straight draw, but keeping Ivey in front.

landed on the turn and Ivey was still in the lead, but a miracle

on the river gave Golbuff a six-high straight and doubled him up.

As the tournament director counted down that stack of Golbuff, all he could do was laugh at what had just happened while Ivey just stared blankly with his famous "Ivey face" and mouth dropped open as if to say, "Was that even real?"

Action folded to Michael Gathy in middle position and he attempted to raise, but only tossed out 13,000 so it was ruled a call. Phil Ivey called on the button and Brent Wheeler checked in the big blind.

After Salman Behbehani raised to 23,000 from the cutoff seat, Michael Gathy reraised all in from the button for 154,000. Action folded back to Behbehani and he called.

The flop, turn and river ran out

and Gathy doubled up.

Action began with Michael Gathy, who moved all in for his last 55,000 from early position. It was folded around to Brent Wheeler in the small blind, who tank-called after some deliberation. Chris Tryba immediately moved all-in from the big blind and Wheeler folded.

, leaving Gathy with nines and deuces for the triple-up.

Phil Ivey has made his 5th Final Table at the 2012 World Series of Poker. Jokingly, the WSOP tournament staff created him a "Reserved" sign for his seat. Here are some photos from early action.