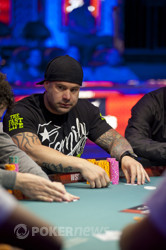 On the first hand of heads-up play, Erik Cajelais and Chris Tryba took the

flop after Cajelais had raised on the button and Tryba called from the big blind. On the flop, Tryba checked and Cajelais bet 45,000. Tryba made the call.

and Tryba checked again. Cajelais fired another bet of around 130,000 and Tryba made the call.

The river card was the

and instead of checking for a third street in a row, Tryba fired 250,000. Cajelais took a minute and then announced a raise. He first put out the 250,000 to call, then thought a few moments more. Then, he announced that he was all in and Tryba snap-called and exploded from his seat, tabling the

for an unbeatable straight flush!

for a king-high straight, but was eliminated in second place. Tryba jumped for joy and shouted at the top of his lungs, knowing he had just won the most coveted prize in all of poker, a World Series of Poker gold bracelet.

For his finish, Cajelais earned $129,766 and fell just short of earning his second piece of WSOP gold.