Players are now on a scheduled 20 minute break.

Every time James Mackey wins a pot he has one railbird in the stands that stands up and yells "Oh, yeah" with a creepy gyrating motion.

It's less of a yell and more of a moan.

The tournament floorman commented, "Oh great, that guy is back."

Apparently the same fan was present at a recent final table that Blair Hinkle was at and did the same thing every time Hinkle won a pot.

James Mackey limped from the small blind and John Nelson checked from the big blind. The flop came

Nguyen held his hand for a moment but then tossed them back to the dealer.

James Mackey opened up the action with a raise to 60,000 preflop. John Nelson made the call on his direct left and a 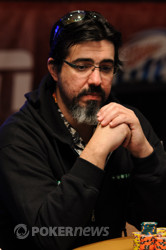 Francois Dur moved all in preflop and Neil Channing snap-called.

and Dur was eliminated.

Nelson Wins Some off Neil

John Nelson opened it up to 60,000 from early position and only Neil Channing in the big blind would make the call. On the

on the turn would see Channing lead for 230,000 and Nelson call. The

would complete the board on the river and Channing would opt to check. Nelson then slammed out a bet of 550,000 and Channing quickly folded.

Henry Lu opened for 60,000 and Francois Dur moved all in from the big blind. Lu called and the hands were tabled.

and Dur doubled up with a pair of tens.