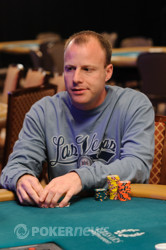 Jared Rosenbaum was in middle position when he open shoved his short stack. On his direct left, Neil Channing made the call and with a flurry of cards going into the muck from around the table, Rosenbaum was at risk.

was well in front of the

that Rosenbaum held and was even more in front when the

flop hit the felt. Rosenbaum begged for the five of diamonds here, but the

on the turn would give Channing the full house and leave Rosenbaum drawing dead.

on the river changed nothing and Rosenbaum was eliminated in 9th place.

Neil Channing opened for 65,000 and Henry Lu called from the small blind. The flop came

came on the turn. Both players checked and the

When Balazs Botond opened the pot to 65,000, Hovan Nguyen would shove all in for 225,000 directly on his left. Botond made a fairly quick call and the two players tabled their hands.

flop kept Nguyen in front, but gave Botond a few more outs. The

turn was great for Botond, giving him the straight and sending him to the rail to celebrate with his friends.

The celebration was a little premature though as a fourth diamond on the river gave Nguyen the flush to send him the double up.

Neil Channing has played three of the four hands dealt thus far. In the last hand he opened for 65,000 from under the gun and Tom Alner called. The flop came

Go Time at the Final Table

The introductions have been made and the cards are back in the air. Let's do this.

Here is how the players look heading into the official final table. As you can see, Henry Lu holds the chip lead by just 10,000 chips more than Neil Channing. Play will be underway in shortly

The players are heading on a short break before the official final table begins. We will have full chip counts shortly. 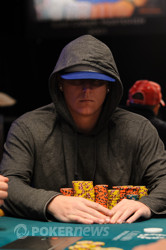 Folded to Zach Clark in the cutoff, he raised it up to 65,000. Henry Lu then made it 150,000 on the button and the action was sent back to Clark. After a few moments thinking, Clark shoved all in. Lu snap called, having Clark covered, and the two players turned their hands over.

Clark was looking good to double up and sit with a great position in this final ten. However, the

flop had other ideas and when the turn and river bricked out, it was all over in 10th place for Clark. With that, Lu continues his rampage and rise up the counts.

We had barely gotten settled in our perch at the ESPN Feature Table when Balazs Botond and Neil Channing got in a huge hand.

We missed the action but the board was

and there was a huge pot already built. Channing bet 350,000 on the river and Botond called.