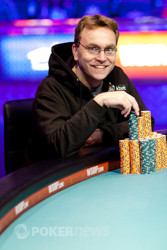 Neil Channing opened on the button and Henry Lu called. The flop came

Lu called and the river came

for two pair and Lu mucked.

board out on the felt.

Lu raised preflop and Channing called. On the flop, Channing check-called a bet from Lu. Both players checked the turn and Channing led for 375,000 on the river. lu folded here and Channing raked in the pot.

Neil Channing and Henry Lu went to a flop of

Lu mucked his hand and Channing picked up the pot.

Lu Wins First One Back

flop, Lu reached for a bet and and Channing folded his hands quickly, sending some chips to Lu.

The two players are back from their break. Let's try and crown us a champion.

The two remaining players are on a 20 minute break.

Channing Takes One Back

Neil Channing opened to 125,000 on the button and Henry Lu called. The flop came

. Both players checked and the river came

. Lu check-called 325,00 and then mucked when Channing tabled