Henry Lu was on the button and raised it up to 175,000. Neil Channing made the call and a

flop was dealt. Channing led for 215,000 here and received the call. Both players then checked the

landed on the river. This time when Channing bet, Lu went to reach for chips, and before he could make a bet, Channing had flicked his cards into the muck.

Channing has regained the chip lead.

Neil Channing raised the button to 175,000 and Henry Lu quickly three-bet to 500,000. Channing took a little longer to make his decision, but eventually four-bet to what looked like 1,300,000. We say "looked like", because Lu had folded his cards before Channing had the chance to push the bet fully out onto the felt. 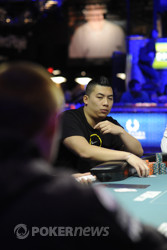 "How much do you have behind?" Channing asked Lu. The floorman gave an apporoximate count to Channing.

Channing called and the turn came

Channing wasted no time in folding and Lu has taken a slight chip lead over Channing.

Another One For Channing

Neil Channing limped the button and Henry Lu called. On the

Channing took a moment before folding, in what felt like a huge spot.

Neil Channing and Henry Lu took to a

river, Lu opted to check again and then Channing bet 500,000. That was too much for Lu and Channing took down the pot. 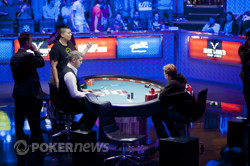 Neil Channing opened to 175,000 on the button and Henry Lu raised to 480,000. Channing then slid out 1.5 million and Lu moved all in. Channing called and the cards were tabled.

and Lu doubled up and has chips to play with Channing.