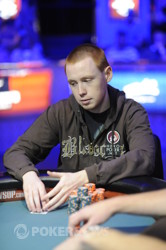 Straight after James Mackey doubled through Neil Channing, it was looking like it was about to happen all over again. This time, Mackey was all-in holding

flop and Mackey's rail would be up on their feet celebrating. The

turn changed nothing and it was looking like Mackey was in very good shape to give himself a real chance at making a run at the title.

The poker gods had different ideas as the devastating river would give Channing the best hand, eliminating Mackey in third place and sending Channing into the heads-up battle with an unprecedented chip lead.

Neil Channing opened from the small blind and James Mackey shipped from the big blind. Channing called and the hands were tabled.

and Mackey doubled up. 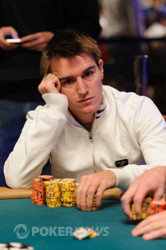 From the small blind Tom Alner moved all in and Neil Channing called after a count.

and Alner was eliminated. Channing has close to 75% of the chips in play.

Tom Alner has now open shoved his stack twice and received no action. It's only a matter of time before he doubles up, or perhaps busts.

Henry Lu opened the pot to 125,000 from the button and Neil Channing would call out of the big blind. On the

flop, Channing would check and Lu would bet 150,000. A call from Channing and the

would hit the turn. This time Channing opted to check-call, sending the pot to Lu.

Biggest Pot of the Tournament 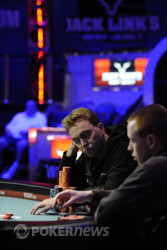 Neil Channing and James Mackey in a pot together.

Neil Channing and James Mackey continued their duel and played the biggest pot of the tournament so far. On a flop of

, Channing checked and Mackey bet 255,000. Channing took a minute and raised to 715,000. Mackey shuffled his chips in thought and then quietly called.

and Channing bet 1,325,000. The tension was high in the Mothership as they waited for Mackey's decision. Ultimately, Mackey called after some thought.

for a full house and Mackey mucked his hand.

Lu Picks Up Chips From Channing 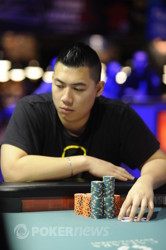 Neil Channing opened for 125,000 and Henry Lu called from the small blind. The flop came

. Both players checked and the river came

for two pair and Channing mucked.

Mackey Gets Some Off Channing

Neil Channing and James Mackey took to a

flop and Channing promptly bet 90,000. Mackey made the call and a

was dealt on the turn. Channing checked here and Mackey bet 210,000. After quite some time, Channing otped to check-raise, making it 625,000 to go. Mackey made the call and the last card was dealt.

river and James' hand came up trums, with a

good enough to send Channing's ace-high into the muck.

James Mackey opened for 120,000, Henry Lu called from the button and Neil Channing made it 340,000 from the big blind. Mackey folded and Lu reluctantly gave up his hand.