James Mackey just won a hand and before Mackey's "Oh yeah" fan could do his thing Tournament Supervisor Dan Fouts gave an "Oh yeah" over the mic.

The crowd laughed and Fouts asked if he could borrow the fan's oversized floppy visor.

Folded to Henry Lu on the button, he raised it up to 100,000 and James Mackey called out of the big blind.

flop would see Mackey check-call a bet of 120,000 from Lu. Both players would then check the

Lu Wins Another Small One

flop hit the felt. Lu led for 230,000 here and Mackey sent his cards into the muck and the pot to Lu.

John Nelson raised to 100,000 from the small blind and Henry Lu re-raised from the big blind to 220,000. Nelson thought for a minute and then moved all in. Lu let his hand go and they went on to the next one.

Channing Too Strong For Lu

When Henry Lu opened up the pot with a raise, Neil Channing would promptly three-bet him to 205,000. A call from Lu would see a

flop dealt on the felt. Channing would lead for 165,000 here and Lu call. Both players then took their time to check the

river would see Channing fire out a large 595,000-chip bet, too much for Lu who sent his cards into the muck. 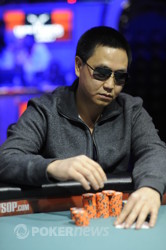 Hovan Nguyen open-shoved from the small blind and Neil Channing called from the big blind.

and Nguyen was eliminated.

The pot was opened by James Mackey and he received the call from John Nelson on his direct left. The

flop would see Mackey lead for 100,000, Nelson call and then both players check the

river, Mackey bet 255,000 and Nelson called. When Mackey tabled his

, the two-pair was enough to rake in the pot and send Nelson's cards into the muck.

Tom Alner opened for 80,000 from under the gun and John Nelson called from the small blind. The flop came

James Mackey opened up the pot with a raise and was promptly three-bet to 200,000 by John Nelson. Mackey called and the

turn would see both players check, just as they did on the

was strong enough to beat the

that Nelson held, with Mackey raking in the pot.