James Mackey's "unique" rail bird has continued with his "Oh yeah" gyration. Some members of the audience are starting to heckle him a bit.

John Nelson opened the action with a raise to 85,000. Only Henry Lu on the button would make the call and the dealer would flip over a

on the turn would see Nelson check and Lu bet 110,00. Too much for Nelson, he sent the pot to Lu. 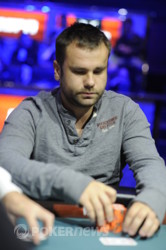 Balazs Botond open-shoved all in preflop and John Nelson shoved over the top from the small blind. Henry Lu folded his big blind and the hands were tabled.

Folded to Henry Lu in the small blind, he raised it up. Tom Alner flicked in a call from the big blind and a

Neil Channing opened for 80,000 from the cutoff and James Mackey raised to 180,000 on the button. The blinds released and Channing sat motionless for a moment.

He then put out a large re-raise to 510,000. Mackey folded in short order and Channing picked up a pot out of position.

Botond Snags a Double From Behind

Balazs Botond open shoved his stack of 240,000 and received a call from James Mackey in the big blind.

When Botond tabled his

, he was behind and in need of help against Mackey's

was practically gin for Botond as he took the lead, however he would still need to dodge plenty of cards.

river were great for Botond as he took the double and put a small dent in Mackey's stack.

Neil Channing opened to 80,000 and John Nelson called. The blinds released and the flop came

The players are back from their break and ready to play some more poker here at the final table of Event 43.