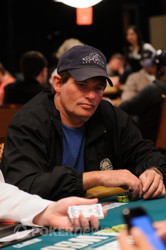 After the dinner break the field was trimmed to just 770 players, a full 2,000 players had been eliminated. Up to that point an average of three players were busting every minute.

flop. Barnhart bet and was called all the way to the river. On the river Barnhart committed ¾ of his stack and his opponent insta-shoved all in. Barnhart snap-called and tabled

a paid Barnhart off in full.

Sands had an above average stack for most of the day. But his day turned sour quickly after the dinner break. Sands was on the button and had his stack whittled down. The player in the cutoff open-shoved and Sands thought about his action. After just 20 seconds a player not involved in the hand called the clock on Sands.

A floorman was summoned and as per their procedure asked the dealer if Sands had had sufficient time to act on his hand. The dealer replied no and an argument ensued between the player that called the clock and the floorman.

The floorman ended the argument to point out a hand was still in play. Sands shoved holding

and the player in the cutoff had pocket eights. Sands bricked on the board and left in frustration.

Day 2 will see cards in the air promptly at 1:00 p.m. PST in the Purple Section of the Amazon Room. Follow all the WSOP action live as we play down to a final table on PokerNews.com.

An Assortment of Chip Counts

The field will play five more hands and then bag and tag for the evening.

Just before end of Level 10, Tom Marchese went all in for about 6,200 from middle position. Erik Cajelais three-bet to 12,000 on the button to isolate, but Andres Sanchez in the big blind four-bet all in for 53,600 after about 90 seconds in the tank. Cajelais called and we had about a 115,000-chip pot on our hands.

Sanchez took it down when the board ran out

After the under-the-gun player opened to 1,600, the next player to act three-bet to 3,400. Huy Nguyen called from middle position, the original raiser called, and the flop fell

The UTG player checked it to the three-bettor who bet 4,400. Only Nguyen called to see the

turn. Both checked and did the same when the

, besting his opponent's hand to win the pot.