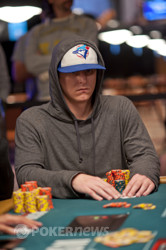 Zach Clark will take the chip lead to Day 3.

Day 2 of Event 43, $1,500 No Limit Hold’em, of the World Series of Poker has wrapped up after ten action-packed levels. There were 320 runners that returned for the day and only 20 remain. Zach Clark leads the field after bagging up 1.342 million.

Channing spent time on the leaderboard and was running well, but really hit his stride in a hand against Rodrigo Caprioli. Channing held

Rettenmaier spent most of the afternoon near the top of the leaderboard. He lost a key hand against Carl DiVeglia III where DiVeglia’s

outran his pocket tens. He was reduced to about twelve big blinds and then chipped up through Henry Lu. His luck would not last though; he was eliminated after the last break of the evening.

Zach Clark won a giant hand three-way pot where his pocket queens flopped a set. He went from around average to one of the tournament leaders when he walked away from that hand with over 750,000.

Day 3 will have cards in the air at 1:00 p.m. PST and should play down to a winner. It could be a close call with X players remaining. Follow all the WSOP action live on PokerNews.com.

The tournament clock has reached the ten minute mark and they will play three more hands before bagging and tagging.

We had a preflop all in showdown between Karim Vegas and John Nelson.

and Vegas was eliminated.

and Phillips was eliminated in a shocking fashion.

We missed the preflop action but Julian Herold was all in against Neil Channing.

and Channing retook the chip lead.

The field has reached 27 players and the clock has been paused for a complete redraw. We'll have it posted shortly.