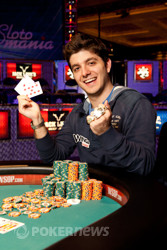 After three hard-fought days of Texas Hold'em, Event #44: $1,000 No-Limit Hold'em is in the books with Rocco Palumbo standing tall as champion.

Day 1 began with 2,949 entrants, which marked the second-biggest field thus far during this year's World Series of Poker. (The Senior's Event drew a record-setting field of 4,128).

With a field this epic, you can be sure there was no lack of pros and notable names. Some who joined the action in Day 1 include Barry Shulman, Terrence Chan, Liv Boeree, Joe Cada, Jonathan Little, Jude Ainsworth, Ivan Demidov and Amnon Filippi.

Of those players, several would go on to make a deep run in Day 2, but eventually fall short of the final table. Some names that were unable to survive into Day 3 include Cada (112th), Little (104th), Soi Nguyen (88th), Ainsworth (78th), Demidov (76th), Maya Antonius (65th) and Amnon Filippi, who busted in 62nd after coming into Day 2 as one of the chip leaders.

Blair Hinkle would also make deep run, but he fell short of the final table after busting out in 24th place. This would mark another deep run for Hinkle, who managed a 4th place finish just four days ago in Event 38: $1,500 No-Limit Hold'em.

When Day 2 was all said and done, just 16 players remained to compete for the gold bracelet in Day 3. Among them included bracelet winner Keven Stammen, who won a bracelet back in 2009 and the last woman standing, Anke Berner - who came into day two with just 7,600 in chips. However, Berner managed to build her stack and survive into Day 3 tied for fourth in chips.

Here is how the final two tables looked in their entirety going into Day 3:

When Day 3 began, the eliminations came swiftly and we reached our final table within just two levels of play. These early eliminations included Delis, Solokoff, Brar, Thomas, Azares and Stammen, who all fell just short of the final table.

Shortly after the remaining ten players relocated to the main feature table, Darren Rabinowitz was eliminated when his pockets kings fell to Elia's ace-king after getting all in preflop.

And just like that - we had our official final table. Here is how it looked:

David Forster left our official final table first after getting into a preflop raising war with Palumbo. Forster ended up calling a Palumbo four-bet all in with

, which was crushed by the

of Palumbo. Forster couldn't pull the miracle and was sent to the rail in ninth place.

Next to go would be Karschamroon after getting all in preflop with pocket eights against the queens of Everett. Karschamroom didn't improve and he was sent to the rail in eighth place.

The sole-remaining lady, Anke Berner, was sent home next after pushing all in with

and running into the

of Niel Mittelman. The board failed to improve Berner's hand and she was sent eliminated in seventh place.

Out in sixth place was Elia, who pushed his short stack into the middle from the big blind on a

flop after calling a preflop raise from Palumbo. Palumbo snap-called with

and eliminated Elia after he failed to improve.

Everett hit the rail after running his

of Robinson all-in preflop. Robinson was dominated and failed to get any help from the board - sending him home in fifth place.

Mittelman made his exit in fourth place after getting into a preflop raising war against Robinson. After the smoke cleared, Mittelman was all in with

against the pocket eights of Robinson. Mittelman bricked out and was sent home.

Conway, who had not been involved in many pots during the final table, met his end after calling an all-in push from Palumbo with

and the board kept Conway second best - sending him to the rail in third place.

When heads-up play began, Palumbo enjoyed a slight chiplead over Robinson and quickly put his chips to work. Palumbo played aggressively to slowly whittle Robinson down to just over one million in chips. However, Robinson proved resilient as he doubled through Palumbo not once, but twice as a short stack. However, Palumbo would not be denied. Shortly after dinner break, Robinson and Palumbo would get into a preflop raising war. Robinson four-bet pushed all in with

for his remaining stack and Palumbo called with

and Palumbo claimed Robinsons' remaining chips with aces and fours.

And just like that, Palumbo claimed his first WSOP gold bracelet and the $464,464 prize that went along with it!

Be sure to check out our other coverage of the 2012 World Series of Poker, including the star-studded $50,000 Poker Players Championship, which is currently in its third day.

Rocco Palumbo of Italy outlasts a field of close to 3000 runners to capture a WSOP Gold Bracelet. Winner photos by Neil Stoddart/Reaction photos by Joe Giron

Rocco Palumbo waits with his rail for the cards to fall. 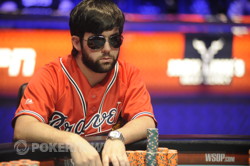 Just a few hands after the dinner break and we have our champion. The last hand of the tournament began when Nelson Robinson opened the button to 120,000. Rocco Palumbo then asked how much Robinson had, before three-betting to 300,000. A few moments thought and Robinson would four-bet all in. Palumbo shrugged and made the call and the two players turned their hands over.

Robinson was behind and in need of some help. The

flop was the opposite of help and by the time the

river had run out, it was all over for Robinson.

Nelson Robinson had the button when he raised it up. Rocco Palumbo called and the

flop was dealt. Palumbo check-called a bet of 115,000 here and then both players checked the

river, Palumbo led for 170,000 and Robinson let go of his hand, sending the small pot to Palumbo.

Rocco Palumbo opened to 120,000 and Nelson Robinson made the call from the big blind.

and Robinson checked to Palumbo, who bet 110,000. Robinson called to see a turn, which came the

Robinson checked again and Palumbo fired 175,000. Robinson decided to give it up and slid his hand into the muck.

Our two remaining combatants have taken their seats and cards are back in the air. Lets crown us a champion!

Straight after the big all-in hand and the two players are heading on a shortened 30-minute dinner break. Here is how their chip stacks look.

Nelson Robinson opened to 100,000 and Rocco Palumbo made the call.

and Palumbo checked to Robinson, who fired another 100,000. Palumbo then check-raised to 220,000. Undeterred, Robinson pushed all in and Palumbo called to put him at risk.

Robinson was in front with his ten kicker. The

river kept Robinson in front and he doubled through to 2.7 million.