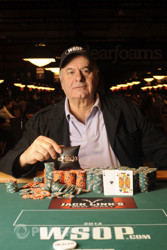 It took four days and more than 32 one-hour levels, but we have a reached a winner in Event 50, the $5,000 No-Limit Hold'em. Panayote "Peter" Vilandos is the sole survivor of a field than began with 1,001 players. He'll take home the $952,694 first-place prize, along with his third World Series of Poker bracelet.

Saturday's Day 3 failed to deliver a winner, so the remaining three players returned Sunday with the chance of capturing the coveted WSOP bracelet. Dan Smith entered Day 4 with the chip lead, but was the first to go. Unable to ride the momentum from Day 3, Smith found himself as the short stack at the table by the time his chips were in the middle. He was ahead with

of Vilandos, but a fortunate turn gave Vilandos the lead, and soon the pot, to take a solid chip lead into heads-up play.

With about 8.8 million to Kyle Julius' 5.2 million, Vilandos didn't allow his young opponent to gain any traction. He quickly extended his lead by the time Level 32 ended and shortly into Level 33, Julius was all in at risk with

and dodged Julius' outs to seal the deal.

Congratulations to Panayote "Peter" Vilandos on a job well done and thank you for keeping it here at PokerNews. Be sure to check out our Live Reporting page for updates on all of the other events taking place. 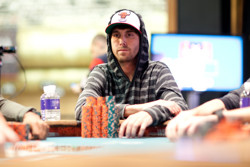 It took just a few hands after the break for Peter Vilandos to close out the heads-up duel.

Vilandos limped on the button, Kyle Julius moved all-in for around 2.1 million from the big blind, and Vilandos made the call.

The crowd was clearly on the side of Julius as they bayed for a five like the wolves in the face of a moon.

There was a stunned silence…then after a few seconds the sounds of, "FIVE, FIVE, FIVE," bellowed from the crowd once more.

The crowd turned their heads away from the table and the two combatants shook hands. Kyle Julius had come as close as he had ever come to winning a WSOP title, and for that he should pat himself on the back. For Vilandos it is now a hat trick of WSOP titles and what an amazing feat that is.

The two players are now on a twenty-minute break

More of the same really. Peter Vilandos limped from the button, Kyle Julius made it 300,000 and Vilandos called. The flop was

, Julius bet 275,000, Vilandos raised, but before we could count it out Julius had folded. Vilandos turned over

One For Julius; One For Vilandos

We had another Peter Vilandos limp from the button, but this time Kyle Julius raised to 275,000. Vilandos made the call and the pair shared the flop of

. Julius liked the monotone texture and bet 300,000 and it was sufficient enough to win the pot.

Then Julius raised to 250,000 on the button and Vilandos caleld in the big blind. The action checked through to the river on a board of

and Julius called off a 500,000 Vilandos bet. Vilandos turned over

for the baby flush and Julius had called with

Peter Vilandos looks confident and is playing with confidence. His chip stack has only headed further towards the roof since this heads-up match started and here is another example of how.

Vilandos limped from the button and Kyle Julius checked his option. The flop of

created some action after Julius check-called a 200,000 Vilandos bet. Fourth street contained the

and Vilandos pulled back the trigger and fired his second barrel. It was worth 300,000 and Julius took it. The last card was the

and it was followed by a third barrel of 425,000 and Julius called for the third time. Vilandos turned over

for top pair and Julius tabled

for top pair with an inferior kicker.

Kyle Julius raised to 250,000 on the button and Peter Vilandos called in the big blind. The flop was

the same action ensued, this time for 275,000, and finally on the river

, both players checked. Vilandos turned over

and it was enough to win the pot.

A Pot A Piece

Peter Vilandos limped from the button, Kyle Julius raised to 275,000 and Vilandos called. The flop was

was checked through by both parties before we saw the

on the river. Julius checked, Vilandos bet 600,000 and Julius folded.

Then Julius raised to 275,000 on the button and Vilandos called. The action checked through to the turn on a board of