The players are moving to the Pavillion stage. The heads up will be continued shortly.

From the button Will Jaffe raised to 320,000 and Luis Campelo called from the big blind.

Jaffe showed a five, but lost against Campelo's

Jaffe Back on Top 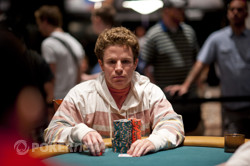 Will Jaffe raised to 325,000, and Luis Campelo three-bet to 825,000. Once again Jaffe moved all in, and Campelo tanked before folding once again.

Jaffe has the chip lead once again, but the stacks are pretty even.

Since Will Jaffe's shove didn't get called he's been chipping up. Luis Campelo is slowing losing chips and both stacks are pretty even once again.

Jaffe has another chance at winning this thing, but he's still trailing Campelo who has a commanding chip lead. 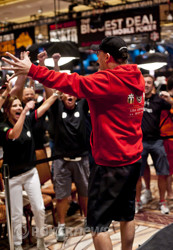 Luis Campelo reacts to doubling up

It was so close to being over. Will Jaffe was just one card away from winning his first World Series of Poker bracelet, but Luis Campelo pulled off a miracle on the river.

and Jaffe took a commanding lead. Campelo needed to catch a king or a deuce, but the turn was the

taking away some of his outs. The Brazilian needed one of the two remaining deuces in the deck, and the Amazon Room exploded when the river brought out the

"Vamos Luis!!" a group of around 20 Brazilians shouted from the rail cheering their friend on. The chanting and cheering continues as Campelo has taken the chip lead.

Finally One For Campelo

Another Million For Jaffe

Will Jaffe is playing it fast so far, and he takes down the majority of the pots. We just saw he shove after Luis Campelo had raised it up to 325,000, but the Brazilian couldn't make the call.

Jaffe has a commanding lead, and Campelo is down to 15 big blinds.

flop Will Jaffe checked to Luis Campelo who bet 350,000. Jaffe tanked for about 30 seconds and put out a raise to 775,000. Campelo let got of it rather quickly, and Jaffe took down the pot.