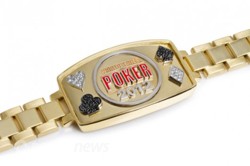 Day 2 of Event #54: $1,000 No-Limit Hold'em has been passed to the poker historians and the man whose name is inscribed in the space reserved for the chip leader is Will Jaffe. Jaffe will be returning for the final day with 1,947,000 chips. It was a fast and furious Day 2 that started with two hundred and sixty-five players, of which fifteen reserved their spaces in the final day. Here are the milestones of a great day of poker.

When the festivities began the dealers were doing most of the work (or more accurately their voices). Screams of "all-in" and "call" filled the air that was once occupied by the carnival smoke emanating from the One Drop area. We lost multiple World Series of Poker (WSOP) bracelet winner Huck Seed and legendary WSOP casher Tom McCormick. At the same time Benjamin Volpe became our early chip leader.

Two-time WSOP final tablist, John Eames, spun 5,000 into 50,000 and the dangerous German, Martin Finger, found pocket queens too strong for his pocket fours. Finger left, Eames moved up and down like a ship in the North Sea and Jonas Mackoff eliminated Matt Stout.

Will Jaffe was one of the bigger stacks that ended Day 1 and it wasn't long before he started to push his weight around on Day 2. Two-time WSOP bracelet holder Dutch Boyd was the first player to get in Jaffe's way when the unfortunate Boyd lost

hit the turn. Jaffe moved into the chip lead and it was a lead that he would maintain for several levels of play.

The ladies were well represented as we moved into the pre dinner break level. Katherine Dozier, Sofia Lovgren and Wendy Freeman all creating healthy enough stacks to help them wade through the treacle that $1k events can often create.

When we came back after the dinner break, we still had a host of WSOP bracelet holders who were in the hunt for more gold. David 'Bakes' Baker started to really get a run of form going and as Eames was doubling through Jaffe, Bakes was taking advantage by replacing him at the top. Then we lost two bracelet winners in quick succession when Ray Foley and Alex Kravchenko were eliminated as we moved into the final 2-levels of the day; Kravchenko eliminated by another WSOP bracelet holder David Singontiko.

Into the final levels and Bakes stepped on the gas winning a big pot from Jeff Fielder before eliminating Wendy Freedman to move over the one million chip mark. Ken Fishman and Will Jaffe left David Singontiko's hopes of a second gold bracelet hanging by a thread and we lost all of the ladies when Kathy Dozier and Sofia Lovgren both bowed out gracefully.

Jason Tomkins took out Brett Shaffer, Ryan Pringle and eventually the last thread of Singontiko, and he moved into the top three, nestled just behind the new chip leader Ken Fishman and second placed David Baker. Then in the final thirty-minutes Jaffee won a 1.3 million flip against Gianluca Rullo and then won a crucial pot against Baker to cement his place as the number one going into Day 3.

At 1:00 PM we will recommence our mission to slip a WSOP gold bracelet onto the wrist of one lucky man. Please make sure you join us at PokerNews as we bring you all of the action.

Final Counts of the Night

We don't know how the action went preflop, but with a board reading

Will Jaffe bet out 33,000. David Baker then raised it to 83,000. Jaffe made the call and both players were allowed to see the river.

on the river brought a check from Jaffe, and a bet of 156,000 from Baker. Jaffe then raised and mandated 365,000 as the bet. Baker made the call and was in for some bad news.

for a set of jacks, while Baker held a weaker

for two pair. This hand allows for Jaffe to become quite the chip leader with a substantial amount more than anyone else left in the field.

and Smart was gone.

John Eames has had to play a very patient game in the past few levels. In the end he moved 140,000 into the middle, in early position, leaving him 12-15k behind. Ken Fishman called on his left shoulder and everyone else folded.

Eames put his last few chips into the middle and Fishman made the call. It was

for Eames. The turn

not handing Eames the help he required and he was out.

Will Jaffe has just taken the chip lead in a 1.3 million flip against the Italian Gianluca Rullo.

flop throwing Jaffe into the lead and the

confirming the result. It was a close count but Jaffe just about had Rullo covered and he was out in twentieth place.

and with that Castaneda was sent home.