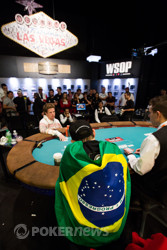 Luis Campelo and Will Jaffe

It has taken three days and 3,219 players to get to this point. We have two players left, Will Jaffe and Luis Campelo. Both players fought it out heads up for 2 levels, and look to come back tomorrow to finish it out.

Play began today with 15 players fighting for contention. Clayton Fletcher was the first player to fall to the wayside after

. After Fletcher we saw a slew of players get eliminated on the journey to the final table; Ian Chan, David 'Bakes' Baker, Benjamin Volpe, and Carl Le all took their leave short of the final 10 handed table.

Of all the players to come up short it was Baker who had faced the worst of it. He managed to call the all in of eventual final tablist Luis Campelo, with

, and the board ran out

giving Campelo the rivered boat. This fact was lost on Campelo who went to shake Baker's hand, thinking he had just been eliminated. The short stacked Baker made his exit a few hands later.

. Jeff Fielder, Benjamin Grise, and Muhamet Perati all followed Schwertley to the rail shortly after.

After knocking out Jason Tompkins in 6th place Joseph Kuether took control of the game with a chip lead he refused to relinquish. Kuether went on to knock out Ken Fishman and gained even more chips.

Nghi Van Tran was the next to leave in fourth place. Three handed play commenced with players trading off stealing the blinds and antes, but eventually a pot did manifest. Luis Campelo and Joseph Kuether managed to get all the chips in the middle with Kuether ahead, but am unfortunate river card put the hand in Campelo's favor, causing for the bigger stack Kuether to lose a huge chunk. Soon after that Kuether was eliminated by Will Jaffe.

Will Jaffe and Luis Campelo started their heads up match by playing small pots. They ended the day doing the same. For two levels both players traded chips back and forth with neither one moving up and down the counts very much and staying virtually even. Jaffe ended the day with the chip lead, but both players remain close in the counts. The completion of 10 levels brought an end to play for the day. Both players are expected to return tomorrow at 2:00 PM.

It only seemed natural that the two players with the biggest rails would end up heads up. Campelo's camp seemed to explode in excite every time Campelo even stole the blinds. Brazilian chants and cheers have been a common occurrence through out the day and the wave has become quite a common sight at the final table by the Brazilians. Jaffe's crowd hasn't been quite as loud as Campelo's, but they have been steadfast in their cheering Jaffe cheering through out the day.

Come back tomorrow at 2:00 PM for all the PokerNews updates.

Will Jaffe raised it up to 240,000 from the button and Luis Campelo called from the big blind. The flop came

on the turn brought a check from Campelo and a bet of 325,000 from Jaffe. A call was made and both players were off to the river.

landed on the river and both players checked. Campelo flipped over

and was awarded the pot after Jaffe mucked.

Jaffe Gets Two Streets of Value

Luis Campelo raised to 240,000 on the button and Will Jaffe made the call. The flop was

and both players checked. Fourth street brought the

into town and Jaffe led with a bet of 225,000; Campelo called. The final card on the felt was

and Campelo called a 475,000 Jaffe bet. Jaffe turned over

to take down the pot.

Biggest Hand of Heads Up Play

With each player taking down small pot after small pot, a big pot finally started to brew.

Will Jaffe raised it up from the button and made it 240,000 and Luis Campelo made the call. The dealer spread a

flop and Campelo checked. Jaffe made a bet of 270,000 and Campelo raised to 650,000. Action was back on Jaffe who made it 1,200,000. Campelo took a few moments before announcing "all in". Jaffe quickly folded and Campelo took the pot.

Luis Campelo and Will Jaffe 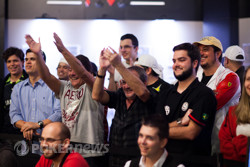 We'll let the two players continue folding to each other while we tell you a story about the rail. It is one of the funniest, interesting and contrastingly different set of fans we have seen at a rail this Summer.

The Brazilians are the loudest and more in voice. They are singing and throwing their arms up in the style of the Mexican wave (they even do a slowmo version). The American rail are a lot more reserved, hardly saying anything except for the odd occasional strange scream.

In the past few minutes each time an American says anything, the Brazilians respond my 'shushing' them in unison. The Americans simply don't know how to react and then go into silent dumbstruck mode. It is hilarious and is keeping everyone occupied until we find aces and kings simultaneously on the felt.

Luis Campelo raised on the button and Will Jaffe called in the big blind. The flop was

was checked through on the turn, before Jaffe won the pot with a 475,000 river bet, at the sight of the

Will Jaffe just got creative and three-bet an open from Luis Campelo who duly folded.