Su Chipping Up Some More

Picking up the action on fourth street, Andy Bloch check-called a bet from Su. He also checked on fifth street, but folded after Su fired another bet.

Barry Greenstein brought in with the

up and then Andy Bloch completed the bet. Stephen Su raised and then Greenstein reraised. Bloch folded and Su made the call.

On fourth street, both Su and Greenstein checked. Su then bet fifth street when he picked up a pair of tens on board and Greenstein called. Su bet sixth as well and got called, but then both players checked seventh street.

"Two pair," announced Su as he showed the

Barry Greenstein brought it in with the

, Stephen Su completed with the

, and Greenstein re-raised. Su called, and then check-called on fourth street. On fifth, Su paired, and bet. He also fired on sixth and seventh, and Greenstein was forced to fold on seventh.

Is the Ace of Spades Marked? 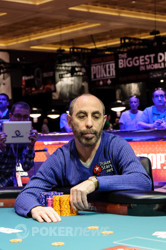 Barry Greenstein is a joker.

Stephen Su brought it in with the

, and Barry Greenstein completed with the

Before mucking, Greenstein looked down at one of his hole cards.

"I guess the ace of spades is marked," he joked.

What They're Playing For

Stephen Su had the bring-in with the

for a six-high straight. Bloch shook his head slightly and mucked his hand.

Below are the current chip counts for the remaining three players following this hand. 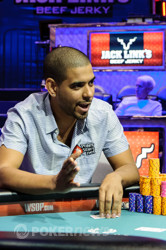 We missed the exact action, but according to a fellow reporter, Williams got the remainder of his stack in the middle with a gut-shot straight draw on fifth street. Stephen Su, who had him at risk, had two pair, and both players bricked on sixth. On seventh, Su flipped his card over immediately, and filled up. Williams was drawing dead, and threw his hands in the air.

Williams was unable to ship his second bracelet today, but banks $36,470 for his efforts.

David Williams brought it in with the

, and Andy Bloch called with the

. Bloch check-called a bet on fourth, and Williams paired on fifth. Williams led out, and Bloch folded.

A few hands later, Bloch brought in with with the

, and Williams completed with the