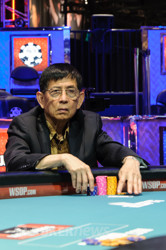 Huu Vinh was just eliminated in fifth place at the hands of Andy Bloch. He took home $26,813 for his finish.

Vinh completed the bet on third and Bloch raised. Vinh called and then called a bet from Bloch on fourth. On fifth street, Bloch bet and Vinh raised. Bloch paused.

"How much do you have behind?" Bloch asked Vinh.

Bloch took another minute to think, then fired back with a reraise. Vinh reraised and Bloch just called. On sixth street, Vinh picked up a pair of sevens and bet his last 11,000. Bloch called.

"I have three pair," said Vinh as he showed the

from the hole. Bloch held the

On seventh street, Bloch pulled the

and that gave him aces and kings. Vinh now needed to improve to stay alive with a queen, jack or seven. He pulled the

, though, and was eliminated in fifth place.

Barry Greenstein brought it in with the

, and David Williams raised with the

for two pair. Williams mucked, and Vinh pulled in the pot.

A few hands later, Stephen Su brought in with the

, Andy Bloch completed with the

, and Williams called with the

Williams led out on fourth, Bloch called, and Bloch paired on fifth. He led out, and Williams quickly folded.

David Williams just got some chips back after making a spade flush against Andy Bloch's queen-high straight. Here are the current chip counts, approximately.

Andy Bloch brought it in with the

, David Williams completed with the

, and Huu Vinh raised with the

. Only Williams called. Vinh led out on fourth, Williams raised, and Vinh called. Williams then check-folded on fifth.

A few hands later, Barry Greenstein completed with a

showing, Williams raised with the

for a full house, and Williams showed two-pair before mucking.

Vinh Gets Some Back

Andy Bloch had to bring in with the

Picking up the action on fourth street, Andy Bloch bet and Huu Vinh called. Then on fifth street, Bloch bet again. Vinh gave it up and dropped back to 130,000 in chips.

After Huu Vinh brought in with the

showing, action folded over to David Williams and he completed the bet. Stephen Su made the call and Vinh folded.

"Aces," said Williams as he turned over the

Williams scooped the pot and moved back over 500,000 in chips.