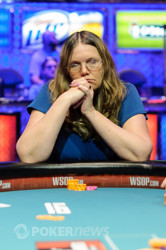 David Williams brought it in with the

On sixth street, Hermesh spiked the

, making a better pair. The

bricked for Bloch. Seventh street was dealt face-down, and Bloch immediately flipped over

, giving him two-pair. Hermesh needed to pair up or make trip aces, but she didn't. The

was a brick, and Hermesh was eliminated from the tournament. 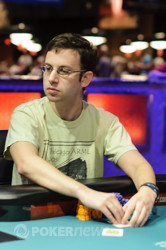 Scott Abrams brought it in with the

showing, and the action folded to Caroline Hermesh, who completed with the

. Abrams shrugged, and tossed in enough chips to move all in. Hermesh quickly called. Abrams tabled

for a pair of sixes.

Hermesh's sixes were good, and Abrams was eliminated in ninth place.

Misunderstanding Leads to a Hermesh Double Through Williams

This was was a bit interesting in that Caroline Hermesh shouldn't have doubled, but she did. She started the hand with the

showing and had to bring-in. She asked what the amount was, but the tournament director thought she had asked what the completion amount was. He told her it was 6,000 and she completed the bet. Action folded to David Williams and he just called with the

up. When this happened, the tournament director announced that Williams made the call and Williams looked a little puzzled, clearly thinking he was completing the bet as he didn't see Hermesh come in for the complete amount.

Due to being short, Hermesh bet her last chips on fourth and fifth. She bet 6,000 on fourth and then bet all in on fifth for her final 4,000. Williams called both times.

Williams was ahead on fifth when the money went in with a pair of queens, but Hermesh hit a Broadway straight on sixth street to leave Williams drawing dead and officially earn her the double up.

As she was pulling in the pot, Hermesh mentioned that she had originally asked for the bring-in amount and not the completion amount. There was a misunderstanding, but in this case it allowed Hermesh to play her hand differently and double up through Williams.

Picking up with the action on fourth street, Stephen Su checked and Scott Abrams bet. Su check-raised and Abrams called.

On the following three streets of fifth, sixth and seventh, Su bet each time and Abrams called down.

"I have a flush," said Su as he turned over the 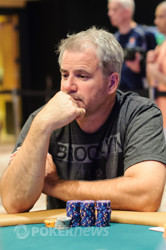 Lee Goldman brought it in with the

, and Su completed on his direct left. Vinh tanked before calling, and Ranciato move all in for only 500 more. Goldman released, and both Su and Vinh called.

Vinh called a bet from Su on fourth street, and then Su slow down on fifth street, check-calling bet from Vinh. Both players checked on sixth, and on seventh, Su checked a third straight time. Vinh tanked before betting, and Su released his hand.

Ranciato, who had stood up in defeat on fourth street, rolled over

for a pair of sixes, but it was no good against Vinh's

for two pair. Ranciato is eliminated from the tournament, while Vinh is now above 100,000 chips.

Big Chip Up for Vinh

Huu Vinh had the bring-in with the

up and Scott Abrams completed. Andy Bloch and Joseph Ranciato both called before action folded back to Vinh. He also called.

Greenstein brought it in, Bloch completed, and Greenstein called. On fourth, Greenstein check-called a bet, but when Bloch led out on fifth, he released.

Greenstein Takes an Early One

Caroline Hermesh entered the day as one of the shorter stacks, and after losing a hand to Barry Greenstein, she has less than three big bets.