To Speak, or Not to Speak

Before the final table announcements, made by the legendary Redbull Robbie Thompson, the players were discussing the new "verbalization rule." Earlier today, Jonathan Aguiar was protesting the rule on Twitter - he was at the final table of Event 5: $1,500 Pot-Limit Hold'em yesterday - and Andy Bloch apparently agrees with him. He doesn't want to verbalize his actions either.

We'll keep an eye on how the players adapt, or if they ignore he rule altogether.

Let's Get it Started

The players are seated, the announcements are finished, and the cards are in the air.

In other words, it's go time.

Day 3 Begins with Williams in the Lead 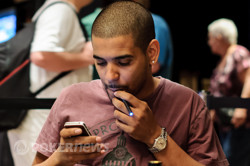 David Williams is looking to smoke the competition.

Unlike Williams, Andy Bloch, who has over $4.5 million in live career tournament earnings, including a $1 million score in the 2006 $50,000 H.O.R.S.E. Championship, doesn't have a bracelet yet. Bloch's finished runner-up at the WSOP twice (to David "Chip" Reese in the aforementioned H.O.R.S.E. Championship, and to Nenad Medic in the 2008 $10,000 World Championship of Pot-Limit Hold'em), and has dozens of WSOP cashes. The only thing missing from his résumé, is a bracelet. That may change today.

PokerStars Team Pro Barry Greenstein has three WSOP bracelets to his name, none in seven card stud hi, but hasn't won a WSOP event since 2008. Greenstein cashed five times at the 2011 WSOP, including a third-place finish in the $10,000 Limit-Hold'em World Championship. This is the Bear's 15th WSOP final table appearance.

If Caroline Hermesh can survive one more elimination, she'll be the fourth woman to grace an official final table at the 2012 WSOP. Patricia Baker (2nd in Event 1), Vanessa Selbst (4th in Event 2), and Xuan Liu (7th in Event 4) have all made final tables, but none of them were able to capture the gold. Of course, no woman has won an open event at the WSOP since Selbst took down a $1,500 pot-limit Omaha event in 2008, but at the rate we're going, that's going to change very soon.

Hermesh has less than six bets however, but don't count out her, Joseph Ranciato (3 big bets), or Huu Vinh (2 big bets). If the New York Mets can throw a no-hitter, then anything is possible.

Nine players remain from the 367-player field, and our plan it to play until there's a champion. The cards will be in the air within the hour - who's turn is it to make history today?