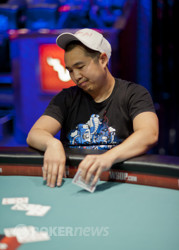 After making quads on fifth street in a previous hand, Andy Bloch completed with the

. Stephen Su raised with the

, and Barry Greenstein, who brought it in with the

Bloch check-called a bet on fourth street, and then led out on fifth. Su raised, putting himself all in, and Bloch called.

Both players were dealt a ten on sixth street, and Bloch's pair of tens gave him the lead. Seventh street was dealt face-down, and Bloch immediately turned over the

. Su needed a jack, seven, three, four, or ten to survive, but the

Su receives $50,332 for his third-place finish, while Bloch is now heads up, looking for his first WSOP bracelet.