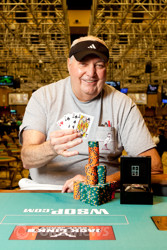 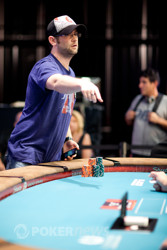 And then it was all over! Within a couple of hands Herbert Tapscott found a way to end Gavin Griffin's resistance and we've got ourselves a winner. Griffin raised to 200,000 from the button and Tapscott made the call. The flop came down

and Griffin was all in blind for his final 65,000 chips. Tapscott made the call and showed

giving Tapscott the winning hand and the gold bracelet!

Griffin just limped on the button and Tapscott checked. The flop was

hit the board and Tapscott bet 200,000. Griffin called and had to muck when Tapscott showed his

. Griffin is getting seriously short but we only have 10 minutes left in the day. Could Tapscott finish it or are we coming back for more tomorrow?

Some of Griffin's Chips Flushed Away

A big pot went Herbert Tapscott's way and it's put Gavin Griffin in the danger zone.

The pot was limped to a

. Tapcott checked-raised at this juncture but Griffin wasn't to be shifted.

and Griffin made a reluctant sounding call. Tapscott showed him

and scooped as Griffin mucked.

Griffin raised the button to 200,000 and Tapscott called. The flop came down

and Tapscott lead out for 200,000. Griffin called and the river was the

. Tapscott checked the river and Griffin bet 200,000. Tapscott called and mucked when Griffin showed his

for the king high flush. 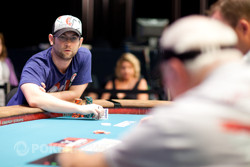 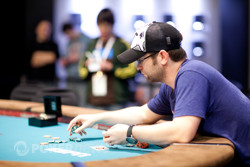