Amanda Musumeci raised to 130,000 from the cutoff and received a call from Ryan Olisar from the big blind. The flop came

Olisar took his time to slide out a raise, making it 375,000 to go. Musumeci mulled over the decision for about a minute and a half before pushing out a call.The turn paired the board, bringing the

and Olisar heaved a stack of 555,000 into the middle. Musumeci mucked and Olisar took down the pot.

Ashkan Razavi has continued his ascent up the chip leader board and now has a comfortable lead over the rest of the players. A recent hand saw Amanda Musumeci open it to 140,000 from the cut-off seat. Razavi called on the button and Derrick Huang called in the small blind.

On the clop, Huang checked and Musumeci bet 205,000. A call from Razavi and a fold from Huang and the dealer would ready another card.

turn would see both remaining players check and an

would complete the board on the river. This time when Musumeci checked, Razavi would slide out a bet of 440,000. Too much for Musumeci, she let her go and sent the pot to Razavi.

Razavi's Turn at the Top 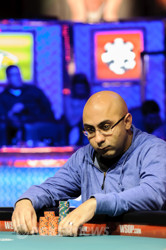 Ashkan Razavi raised to 120,000 and action folded to Amanda Musumeci who tossed in a call from the big blind. The flop fell

and both players checked this time around, allowing the dealer to flip the

river onto the felt. Musumeci pushed out 235,000 and Razavi called, tabling

. Musumeci flicked her cards to the muck and Razavi was awarded the pot, causing his rail, who are all adorned with shirts reading "ASH CAN DO IT", to go crazy.

We didn't see a flop for three hands, with Ashkan Razavi picking up the first and the Derrick Huang opening two pots in a row and getting no action. The next hand after these three hands, Derrick would again open the pot and Duy Ho would say, "He's a machine!"

Machine or not, Ryan Olisar and Ashkan Razavi weren't afraid to rumble on this hand as the three players took to a

flop. Razavi was first to act and went with a check, so too did Huang and it was on Olisar. A bet of 160,000 was enough to scare off his opponents as Olisar stack increases yet again. 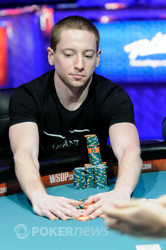 Derrick Huang opened the betting with a raise to 130,000 and Ryan Olisar responded by moving all in for roughly 1,235,000. Action folded back to Huang who announced a call.

Olisar was drawing quite thin when he saw a flop of

. Olisar was able to pick up a couple more outs when the

fell on fourth street. Olisar was in need of an ace or a seven to make the straight in order to score a double up.

The dealer rapped the table and flipped over the river:

Olisar clapped his hands together with excited fervor and sprinted to give his rail section numerous high fives. Huang, on the other hand, looked less than pleased as he watched his chips be pushed to the opponent on his left.

Duy Ho opened up the action to 150,000 and was called by Derrick Huang in the big blind. The dealer spread out a

hit the turn. This time Huang would lead out for 575,000 and Ho quickly called.

completed the board on the river and both players checked. Ho gave a fist pump when Huang turned over

, not good enough for his

Musumeci Wins It Right Back 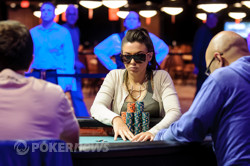 After losing her lead to Derrick Huang, Amanda Musumeci played two consecutive hands which led to her regaining the chip lead.

Duy Ho completed from the small blind and Musumeci checked her option. The dealer laid out a flop of

and Ho tossed in 100,000. Musumeci called and both players checked a turn of

and Ho announced a bet of 250,000 that Musumeci called before Ho was even done pushing out his chips.

for two pair and was able to drag in the pot.

The next hand, Derrick Huang popped it up to 130,000 and it folded around to Musumeci in the small blind who pushed out a three-bet to 305,000. Action folded back to Huang who called.

and Musumeci continued out with a bet of 330,000. Huang thought for over a minute before tossing his hand into the muck.