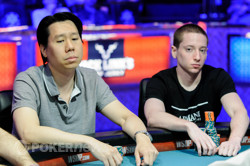 Derrick Huang opened to 110,000 from the cutoff and Ryan Olisar called from the button. The blinds released their hands and the two players were heads up to a flop.

was spread out in front of the players. Huang continued out for 120,000 and Olisar quickly dipped into his stack to make the call. The turn brought the

, prompting both players to check.

and Huang decided to take control of the hand once again, betting out 250,000. Olisar called but mucked his hand when Huang flipped up

for a turned straight.

Huang has been collecting chips rather quickly as of late, and he is currently second in chips, covered only by Amanda Musumeci. Olisar, however, who started today as the chip leader, has dropped to fourth in chips. 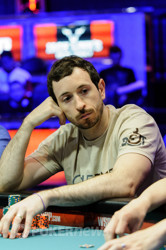 Brian Rast is down to shove mode, holding only a small amount over ten big blinds. He recently did exactly that, but got no action and picked up the blinds and antes.

Folded to Brian Rast in the small blind, he flicked in enough chips to make the call. Derrick Huang tapped the table in the big blind and the dealer would ready the flop.

hit the turn. Rast would again bet, this time 140,000. Another call and the final card would be dealt on the felt, a

Rast didn't slow down here, betting 285,000. Huang opted to go with another call.

"Good call," said Rast as he flipped over

for a pair of jacks would be good enough to rake in the nice pot.

Action folded around to Derrick Huang's button and he popped it up to 110,000. Ryan Olisar pushed out a three-bet from the small blind, making it 265,000 to go.

Duy Ho got out of the way and Huang sat counting chips before pushing a four-bet of 610,000 into the middle. Olisar timidly flung his hang away and Huang showed the

Ho Gains Some Back

Duy Ho was the short stack coming back from the break, but that hasn't stopped him getting active. Ho recently took down a hand that started with Ryan Olisar opening to 105,000. Ho was on his direct left and made the call, while Derrick Huang also called.

flop would see the action checked to Ho and he would bet 100,000. Huang made the call, while Olisar got out of the way.

then hit the turn and Huang would check. This prompted Ho to bet 250,000 - enough to send Huang's cards into the muck and take down the pot.

The first hand back from the break, Duy Ho opened to 145,000 from middle position. All the players got out of the way until Brian Rast asked how much Ho had. Rast was in the big blind and after finding out how much Ho had, decided to lay his hand down.

Ho then flicked over

, which prompted Ashkan Razavi to say, "I would have called if i knew that."

Players are now on an unscheduled five-minute bathroom break. They will receive their fully scheduled break at the end of the next level.

Ho Moves In Against Olisar

Ryan Olisar opened to 80,000 and received a snap call from Duy Ho. It folded around to Brian Rast who also opted to tag along. The players saw a flop of

and Rast checked. Olisar continued for 155,000 and once again Ho made a snap call. Rast got out of the way and the two players were off to a turn.

and Olisar pushed out 250,000. Ho turned around to the tournament director and said that he was all in. Olisar pondered over the decision for about a minute before folding his hand, showing the

Ho obliged to show his hand to the table:

. Olisar remarked that he made the correct lay down while Ho was stacking his newly obtained chips.