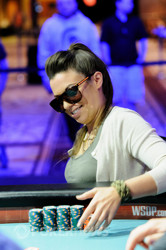 We have a new chip leader thanks to Amanda Musumeci recently taking a pot from Ryan Olisar. The hand in question was opened by Olisar to 80,000. Musumeci then three-bet to 210,000 on the button and Olisar made the call as some cards were dealt on the felt.

would hit the turn. This time both players would check and the

would complete the board on the river.

This time when Olisar checked, Musumeci readied a big bet. She had over 500,000 ready to bet and started placing stacks of 100,000 out onto the felt. The tournament director classified the way she bet as a string bet and Musumeci was forced to bet 105,000 - the amount which the first small stack she put onto the felt was.

. Musumeci then asked Olisar if he would have called a bigger bet. He didn't tell her the answer.

After two consecutive busts, fireworks flew once against when Ashkan Razavi raised to 80,000 and Duy Ho plopped a stack of 500,000 into the middle from the big blind. Razavi instantly announced that he was all in and Ho called.

"This is an internet dealer," joked tournament director Robbie Thompson.

After the table and the railed shared a laugh, the flop of

was spread out in front of the players. The turn and river brought the

and Razavi's kings were able to hold, awarding him a double up. 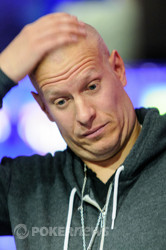 Action folded around to Greg "FBT" Mueller who moved all in for about 600,000. Derrick Huang peered down at his cards and called from the small blind. Ryan Olisar mucked from the big blind and Huang triumphantly tabled

which was crushing the

Mueller found a glimmer of hope on the

flop, giving him backdoor diamond outs and a jack to make Broadway. The turn brought the

, thus leaving Mueller looking for a jack on the river. Unfortunately for Mueller, the

drilled the river and he became the latest casualty of this final table. 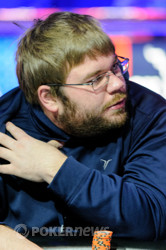 Amanda Musumeci opened to 85,000 from middle position and on her immediate left, Benjmain Reinhart three-bet to 215,000. Action folded back to Amanda who grabbed a large stack of T25,000 chips and moved them to the middle, making it 405,000 to go. Reinhart replied by five-betting all in and Musumeci snap called.

and Musumeci's aces were able to hold, sending Reinhart to the rail and vaulting her into the chip lead. 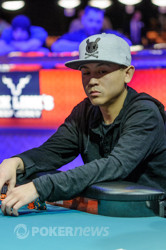 The end of Dien Le's tournament has come to a halt in dramatic fashion as he exits the door in 9th place. It took two back-to-back hands to silence Le and the first one started like this.

Derrick Huang was in middle position when he shoved all-in for 670,000. Dien Le was in the cut-off seat, where he also shoved all-in, with his stack worth 680,000. The play was then on Greg Mueller in the big blind and he immediately got out of his seat. He seemed sickened by what he was seeing.

"I'm allowed to talk about my hand right?" Mueller said. "I'm last to act, i can show my hand or just say what it is?"

He still looked quite unhappy with the decision he would have to make as he said, "I have ace-king in the big blind."

Eventually Mueller decided to lay it down, showing his

as he did so. With Mueller out and two players all in, we would watch the dealer spread five cards on the felt.

By the time the board had run out

, Huang had even more outs and when the

hit the river, he had made his straight to stay alive and prosper. Le however, was down to just 10,000 in chips.

The very next hand, half of Le's stack was all-in with the ante and it would end up being the last hand of his tournament. That hand started with Derrick Huang opening to 85,000. Dien Le then flicked in his last 5,000 and Ashkan Razavi made the call in the big blind.

flop, Razavi checked and Huang bet 105,000. It was enough to get Razavi out of the hand and the two remaining players would turn their hands over. Le's

was in trouble against the

of Huang and despite the

on the turn giving Le some hope, the

on the river would end his tournament life in 9th place.

Ashkan Razavi opened for 80,000 from under the gun only to have Brian Rast push out a three-bet to 210,000. Ryan Olisar called and it folded around to Razavi who also called.

The three players saw a flop of

and Razavi checked. Rast continued out for 285,000 and Olisar quickly called. Razavi got out of the way and the turn brought the

. Rast checked and Olsiar pushed out 455,000. Rast mulled over this decision for about two minutes before mucking

face up, awarding Olisar the pot. 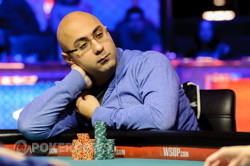 If you look to the rail here at the Event 9 Final Table you will notice a small group of people wearing shirts that have, "Ash Can Do It" printed on them. That seems to be true in the early stages of today's action.

A recent hand saw Ashkan Razavi open it up to 60,000 from middle position. Ryan Olisar made the call on the button and the rest of the table got out of the way.

Razavi took his time to bet 90,000 and Olisar took just as long to raise it up to 200,000. This is when the hand sped up somewhat. Razavi would announce he was all-in and before he had the chance to slide his stack into the middle of the felt, Olisar had flicked his cards away.

As Razavi raked in his new chips, his railbirds, shirts and all, started cheering and chanting.