We've played five hands here so far and have only seen one flop. During that hand, Duy Ho raised to 65,000 from under the gun and received a call from Brian Rast on the button and Ryan Olisar from the big blind. The flop brought

and Ho continued out with a bet. Both other players released their hands and Ho was awarded the pot.

While a steady flow of rail birds pile into the seats of the ESPN mothership, it is clear which players have the loudest rail and that is Ashkan Razavi and Greg Mueller. With both of those players from Canada, it's safe to assume where most of their fans hail from. 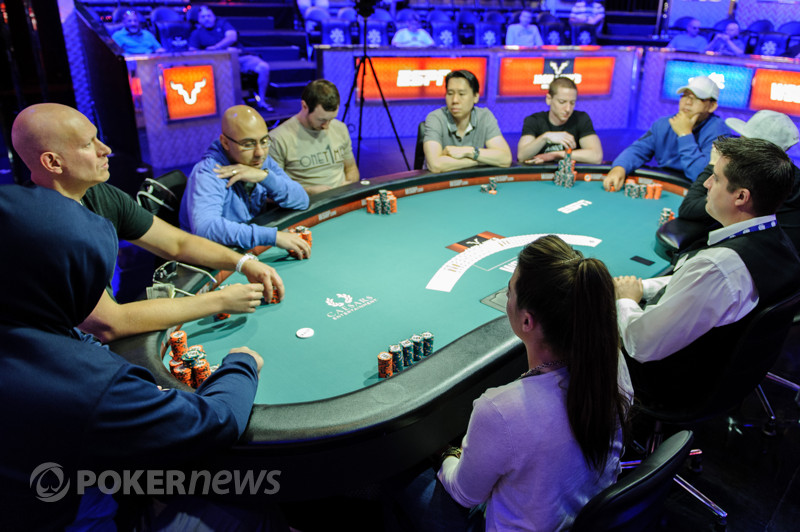 Players are currently being introduced to the crowd here in the ESPN mothership. Play will begin for gold bracelet in a few moments. 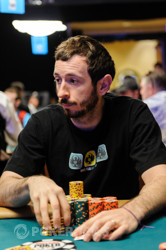 Here we are, just hours away from crowning another World Series of Poker champion. Who will take home the gold bracelet, $791,398 and all the glory to go along with it?

It all started four days ago when 3,404 players dished out the $1,500 entry fee, all with a dream of making it here today. Unfortunately a huge majority of those players were left disappointed, as only nine players are still in contention.

Of those players it is Ryan Olisar who arguably has the best chance of taking down the victory. Regardless of how today goes down, this will be Olisar's biggest live tournament score to date. Olisar starts the day with 3,715,000 in chips - over 1 million more chips than his nearest competitor.

Speaking of nearest competitor, his name is Brian Rast and it is a name to be feared. Rast showed tremendous aggression to build his stack on Day 2 and it didn't stop on Day 3 as he will head into the final table with the second largest chip stack. Rast is probably best known for taking down the $50,000 Poker Player's Championship 8-Game event at last year's WSOP. We think that says enough about his skills on the felt.

The player right on Rast's heels is Amanda Musumeci and it's a name we are familiar with. Last year Musumeci burst onto the scene with a super deep run in the WSOP Main Event, finishing in 62nd place and picking up $130,997. Since then Musumeci has been picking up scores all around the WSOP Circuit and now her poker chops have been proven with a final table here.

He might not have as many chips as his competitors, but it is hard to rule out Greg Mueller. With more than $1.8 million in tournament scores to his name, including two gold bracelets, Mueller is going to be a tough competitor today.

Even though the above four aren't going to be easy to contend with, none of the other players at the final table should be forgotten. They have all worked hard to get here today and we are sure it's going to be a very exciting final table.

The PokerNews Live Reporting Team are going to be in the Rio all day long, bringing you all the action and all the excitement on our way to crowning another WSOP champion. It kicks off in just over half an hour at 1:00 PM, so don't miss it!