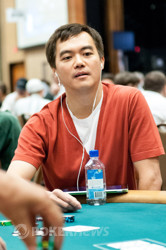 Players have bagged and tagged for the evening and after nine and a half levels of poker, Adam Kornuth has emerged as the chip leader with an impressive 94,700 in chips. Following Kornuth on 89,900 is James Dambrosio.

John Juanda made a fantastic showing during play today and will be returning tomorrow with a stack of 70,600. Juanda saw himself gain a large amount of chips after the dinner break today when the board read

. When two players checked and a third bet 1,600, Juanda pushed out a raise to 4,800. The first two players folded and Juanda's opponent made it 9,600 and Juanda quickly called.

and Juanda's opponent moved 10,000 chips into the middle. Juanda moved all in and his opponent called, tabling

for a straight and was able to double up to 59,000. It was all uphill from there.

With a field this size, it was inevitable that many notable players found themselves felted before play ended. Eric Froelich, Gavin Smith, Steve O'Dwyer, Andy Frankenberger, Dwyte Pilgrim, Mario Ho, Freddy Deeb, and Yevgeniy Timoshenko are just a small sample size of the players to hit the rail today.

Team PokerStars had a fair showing today, with Jason Mercier (50,400) and Liv Boeree (57,700) thriving and moving on to Day 2. That being said, many of the PokerStars pros to enter the event today eventually found themselves walking to the rail. Those to enter and not find the fortunes that Mercier and Boeree found include Vanessa Selbst, Martin Staszko, Shane Schleger, Randy Lew, Vanessa Rousso, George Lind and Andre Akkari.

One name that continued to buzz around the Brasilia room was that of 2010 November-Niner Joseph Cheong. Cheong won his match going into the finals of Event 6: $5,000 No-Limit Hold'em Mixed-Max and at the same time was sitting on a stack of over 20,000 in Event 9. Once The Decision was reached that Cheong will play Aubin Cazals tomorrow morning at 9am, Cheong made an all or nothing move in Event 9.

After a raise to 2,300 from a late position player, Cheong moved all in for his remaining 21,000 from the big blind. His opponent called and showed

which was racing with Cheong's

. The tens held and Cheong was eliminated, and his table showered him with wishes of good luck and fortune for when he returns to the Rio tomorrow morning to play heads up for a gold bracelet.

The 260 remaining players from today's play will combine with the 254 runners from Day 1a for a grand total of 514 returning to Day 2. Giorgio Medici of Day 1a still leads the pack with the top stack of 106,500. Play will resume at 1pm local time and we will be here to provide you with all of the updates. Until tomorrow!

Here is a look at some of the big stacks and the notable names at the end of the night. An official and full end-of-day chip count list will be posted when made available.

Players are being dealt one more hand before bagging and tagging for the night.

Jake Cody faced a bet of 2,600 from the cut off, instead of opting to simply call Cody moved in putting his opponent all in. A call was made and both players tabled their cards.

flop looked like Cody was going to be adding a few thousand more chips to his medium sized stack. However with a

on the turn there was new hope for Cody's opponent who could now hit a queen and double up.

landed on the river and Cody's pot was stolen away from him and now sits below starting stack.

One More Pro Down

George Lind is no longer in his seat and therefore we can confirm he has busted.

The Saga Continues, And Ends

"At least now you can get a good rest before tomorrow," one of the players at Joseph Cheong's table said to him as Cheong gathered his things and made his way out of the tournament area.

Just prior to the start of this level we filled everyone in about Joseph Cheong's troubles with scheduling his heads-up battle for the WSOP bracelet in the $5,000 Mix-Max event. It was going to conflict with Day 2 of this event, which he was looking set to be involved in. Well, that's not the case anymore as Cheong has just been eliminated.

In the hand in question, Cheong three-bet all in for around 21,000 after a player opened it up to 2,300. Cheong's opponent made the call and the two players turned their hands over.

along the felt. And with that it is time for Cheong to focus on the $5,000 Mix-Max event.

There is arguably no better consolation prize to busting a WSOP event, then the fact that in under 12 hours time you will be playing heads-up for a bracelet. Dozens of players wished him luck for tomorrow as Cheong headed out the door and so to do we here at PokerNews.

As per how yesterday finished up, this will be the last level of the night and the play will officially end at approximately half way through this level.