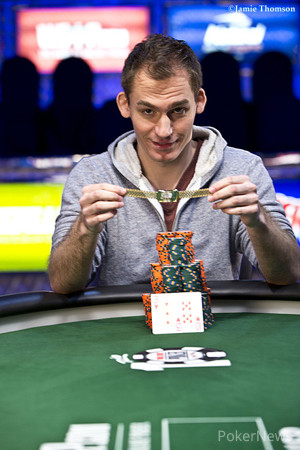 Justin Bonomo took down the $1,500 Six-Handed No-Limit Hold'em event in rather quick fashion inside the Amazon Room today.

He got heads-up with Mike Sowers within the first two hours of play and came back from a more than 4:1 chip deficit to capture the event’s $449,980 first-place prize and coveted gold bracelet.

What started Monday with 1,587 entries was quickly boiled down to just ten players as play began at 1 p.m. But the real speed came in the move from ten players to the final table of six.

and couldn’t improve. Todd Anderson, Viet Vo and Sebastian Pauli were sent packing as well and we were down to six.

Sowers brought the chip lead into the final table, but after Daniel Strelitz got it in with

and spiked a king on the river of a

board, he took the lead.

Sowers grabbed it back, however, spiking a miracle one-outer to bust Niel Mittelman. These two got it all in on a

flop with Sowers on

. The turn card came the

, leaving Sowers with just one out. Sure enough, he hit the

on the river and play went four-handed.

and couldn’t improve against Sowers’

only to find Sowers on

and Strelitz had runner-runner outs to a royal flush or quads, but Sowers held on the

The heads-up battle started slow and Bonomo began battling back from a deep deficit. Within a level, he was even in chips and the hand of the tournament played out.

flop. Sowers bet 260,000, Bonomo called and off to the turn they went. Sowers fired again at the

and Sowers moved in, only to see Bonomo had hit the river hard, turning

into a wheel. Sowers had flopped two pair with

He made it interesting, doubling up countless times over the next 19 hands. On the 20th, Sowers pushed in against Bonomo’s flopped flush and got no help on the turn and river.

Less than one week removed from a heartbreaking second-place finish in the $10,000 Limit 2-7 Triple Draw, Justin Bonomo had earned his first World Series of Poker Bracelet and close to a half million dollars. 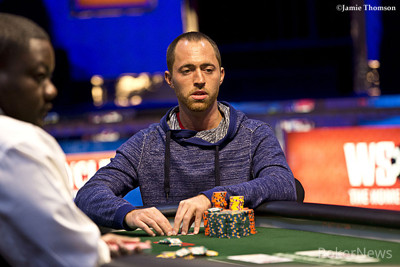 Sowers checked and when Bonomo bet 110,000, Sowers moved all in. Bonomo quickly called.

A flopped flush for Bonomo, but a draw to a higher flush for Sowers who had managed a few improbable double ups so far this match.

. Not this time, and the miraculous return from almost nothing was not going to happen.

and Sowers checked. A bet from Bonomo took it down.

and Bonomo showed the

. The straight on the river giving Sowers another double up.

Hand #154: Mike Sowers opened for 80,000, Justin Bonomo moved in and Sowers called with

river they chopped the pot.

and Bonomo and Sowers both checked. But on the

Hand #147: Bonomo moved all in and was called. Bonomo had

and they chopped it up.

Hand #148: All in again with Bonomo holding

and Sowers got yet another double up.

Hand #151: Bonomo moved all in and Sowers called. Bonomo had

and Sowers got yet another double.

flop was revealed. Sowers bet 260,000 and Bonomo obliged with a call. The turn came the

and Sowers led again, making it 510,000. Bonomo swallowed hard and slid out a call.

and Sowers took his time before moving all in. Bonomo called immediately having rivered a wheel with

and after flopping two pair he was outdrawn and left with just 25,000 in chips.

Hand #142: They’re all in on the next hand with Sowers holding

board ensured a Sowers a double up.

board rolls out and and he doubles up again.

board gives Sowers another double.

The 2014 World Series of Poker is well underway at the Rio All-Suite Hotel & Casino in Las Vegas, Nevada, but that's not the only place you can get your WSOP fix. From June 1-15, grinders in Nevada will be able to participate in the WSOP.com Online Championship Series.

Tonight's event, a $109 No-Limit Hold'em Rebuy with a $25,000 guarantee, begins in a little more than an hour! Here's a look at the schedule of events:

Satellites are underway for as little as $3 right now on WSOP.com, and you can learn more about the series by clicking here.

saw Bonomo check again and call a Sowers 210,000 bet. The river was the

but lost to the

both players checked to see a

turn which was checked again. River

and both checked. Bonomoo had

and that was good versus the

on the turn brought a check from Bonomo and a 235,000 bet from Sowers. Bonomo folded.

flop brought a check from Sowers. Bonomo bet 100,000 and Sowers called. It was the

on the turn and both players checked to see the

Sowers could show just nine-high and Bonomo flashed a king to take it down.

turn was checked by both. But the