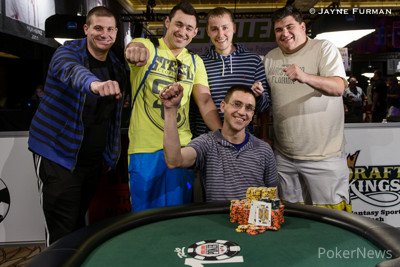 Ohio’s Gregory Kolo is the latest player to win a World Series of Poker bracelet after taking down Event #12: $1,500 Pot-Limit Hold’em, a result that also banked him a bankroll-boosting $169,225 in prize money.

Kolo came into the final table as the chip leader, thanks in part to him eliminating former November Nine member Phil Collins close to the end of play on Day 2, and never really relinquished that lead throughout the final table proceedings.

It took 38 hands for the first player to be eliminated from the eight-handed final table, Ryan Schoonbaert pushing his short stack into the middle with

and being called by Kazu Oshima’s

A final board reading

was not what Schoonbaert was hoping for and he busted in eighth place for a $16,384 score.

Schoonbaert’s exit opened the flood gates and the eliminations came thick and fast.

On Hand #42, David Martirosyan raised to 70,000 and then snap-called when Ahmed Amin reraised all-in with what turned out to be

. By the river the board read

and Amin’s tournament came to an abrupt end.

flop and was looked up by Oshima and his

turn was a relative brick, but the

As we said earlier, the exits came thick and fast and when Tom McCormick three-bet all-in over the top of an Oshima raise on Hand #52 it turned out to be his last move of the tournament. Oshima called with

, leaving the final table with only four players seated at it.

Those four became three 14 hands later with the exit of the aggressive Russian David Martirosyan. He raised from the button and then called with

when Oshima set him all-in from the big blind. Oshima had made his move with the dominating

and was in great shape to win yet another pot.

Oshima had the hand locked up by the turn of the

board and Martirosyan’s deep run ended.

and was looked up by Kolo and his

, which gave Kolo an unlikely straight, and when the river was the

, Bui busted and heads-up was set.

The heads-up duo only played six hands before a champion was crowned.

Kolo raised to 50,000 and Oshima called. The dealer spread the

and Oshima fired 200,000 at Kolo and Kolo called, taking the hand to the

Oshima sat motionless for a few moment before looking at the dealer and announcing he was all-in.

for two pair and Oshima slammed his cards face down on the table before walking away with his face in his hands. The dealer showed the hand, as per WSOP rules, and revealed

for an ill-timed move gone wrong, not that Kolo was bothered because with that hand he became the latest WSOP champion and $169,225 richer in the process. 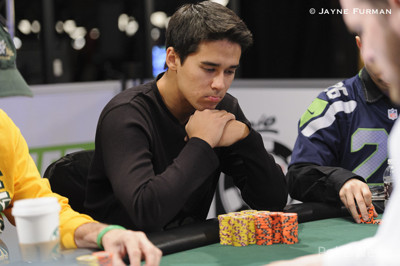 and now Kolo checked. Oshima sat motionless for 15 seconds before moving to pick up 130,000 chips and Kolo folded.

. Oshima checked, Kolo bet 55,000 and Oshima check-raised to 130,000. Kolo rubbed his face as if stroking an imaginary beard before calling.

and a disappointed Oshima slammed down his hole cards and walked off the stage. The dealer turned his card over and showed

Kolo is the latest player to win a WSOP bracelet.

Hands #69-72: Players Feeling Each Other Out

and again both players checked. The

landed on the river and Kolo led for 25,000 and Oshima folded.

was checked around. The turn brought the 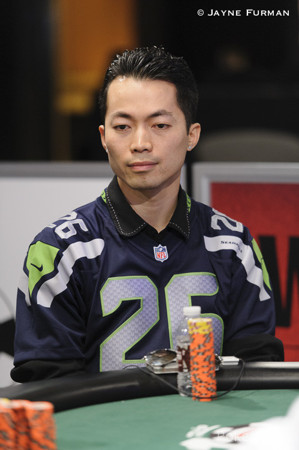 and Kolo turned over

and needed to find some help.

brought some new outs for Kolo and the

turn would give Kolo the straight. The

river sealed it and Bui is bounced in third.

Here are the chip counts as of the break.

Temecula, California’s Kazu Oshima is no stranger to the World Series of Poker.

He made the jump from the online poker world to the world’s biggest tournament series five years ago, but found very little success here in Las Vegas. But now there’s been a sudden breakthrough and he finds himself here at this final table, three-handed, with a bracelet and some $169,225 for first hanging in the balance.

PokerNews caught up with Oshima to discuss his experience so far and see what’s ahead for him.

How has this experience of playing at a WSOP final table been for you so far?

It has been everything I’ve ever dreamed of. This is my fifth year here and I’ve been able to do anything. I’ve been dreaming about this since I was 14 years old, 11 years, and I haven’t had any success at the World Series at all. I’ve lost every year I’ve been here.

I’m still young, but I’ve put in a lot of hours and it feels really nice to have it pay off.

Has play at the final table been what you expected it to be?

There hasn’t been anything too crazy, pretty much what I expected, except ending up here three-handed. That’s what I hoped for but certainly not what I expected.

Pot-Limit Hold’em doesn’t seem to attract the large fields No-Limit does. Do you feel like this is your game, or do you just play everything you can get your hands on?

I play everything that I can afford really and I have a cash game background. I understand not playing with antes and I think a lot of people don’t catch all on the little things that make Pot-Limit different from No-Limit

I got 14th place in this same even three years ago and that’s the best finish I’ve had here, so I think I have a pretty good idea how it works.

Plus with the small field too you have a better chance of winning a bracelet.

You made a deep run at the L.A. Poker Classic recently, and now this, what do you think has changed that you’re seeing all this success on the live felt now?

Patience, that’s a big thing. I feel like I am a pretty patient person. Letting those big hands go when you know you’re beat, and making big calls too, sometimes I just get too attached. I’ve played a lot of heads-up where you play every hand, so ten-handed ring games can be like nails on a chalkboard, you have to fold and fold for hours. So really, patience is the biggest thing I’ve improved on for sure.

Just to try and let the game come to me, see how they play and adjust to that. I have a lot of experience playing shorthanded, so I’m very comfortable and excited to be at this point.

The three remaining players are on a 20-minute break