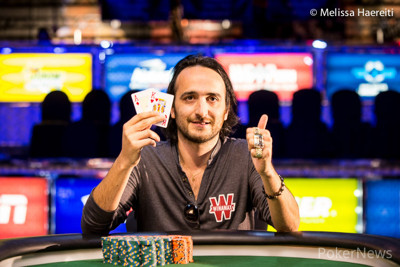 It took four long days of play, but the 2014 World Series of Poker Event #15: $3,000 Six-Handed No-Limit Hold’em finally has a winner. Davidi Kitai, the first-ever braclet winner from Belgium, defeated Gordon Vayo in heads-up play today to capture his third gold bracelet and $508,640 in prize money.

The tournament originally began with 810 players, but today just Kitai and Vayo returned after their heads-up match was paused on Day 3. All told the two played 109 hands of heads-up poker, during which time the lead changed on more than one occasion. Last night Kitai began heads-up play with a 5.84 million to 1.45 million lead, but over the course of 40 hands Vayo pulled out in front.

When they return for Day 4, Vayo was slightly ahead with 3.75 million to Kitai’s 3.545 million. Even so, the Belgian got to work early whittling down Vayo. Eventually Kitai reclaimed the lead he held when heads-up play began, but Vayo didn’t go down without a fight.

First he doubled with pocket aces against Kitai’s

, despite the latter flopping a big sweat. Then Vayo got lucky to double with the

in an all-in preflop situation. However, both of those doubles just delayed the inevitable as Vayo would only drop back down.

Eventually Vayo got it all in holding the

and was dominated by the

of Kitai. The board ran out clean, and Vayo had to settle for second place and a $314,535 consolation prize. 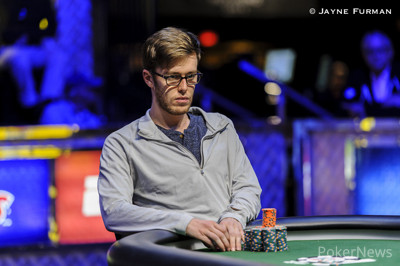 Hand #227: Kitai folded his button and Vayo received a walk.

and Vayo the dominated

. Kitai left the table and went to stand with his friends on the rail. Vayo remained at the table with his hands behind his head.

flop kept Kitai’s hand ahead and actually gave him extra outs to a straight. The

on the run changed nothing and the

on the river secured the win for Kitai who now has three World Series of Poker bracelets to his name and is the first non-American winner of a bracelet at the 2014 WSOP.

Hand #225: Davidi Kitai called on the button, Gordon Vayo checked his option, and the flop came down

completed the board on the river, Vayo checked for a third time and Kitai bet a hefty 775,000. Vayo thought for a bit before calling, but mucked when Kitai tabled the

for a straight to the six. 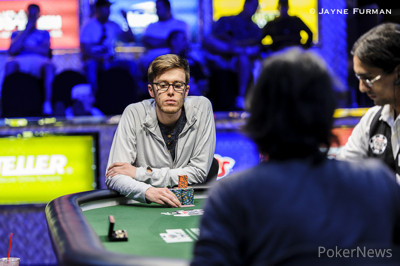 and was ahead of Vayo’s

, but only as long as the

and Vayo doubled up.

Hand #216: Gordon Vayo limped from the small blind and Davidi Kitai checked his option to see a

appeared on the turn. Kitai bet 255,000, and Vayo responded with a call. When the

completed the board on the river, Kitai thought for a bit before sliding out a bet of 575,000 and Vayo snap-folded.

Hand #217: Davidi Kitai moved all in and Gordon Vayo folded.

Hand #219: Davidi Kitai moved all in and Gordon Vayo folded.

Hand #207: Gordon Vayo, fresh from doubling up with pocket aces, called from the button, Davidi Kitai set him all in and Vayo folded.

Hand #210: Kitai called on the button and Vayo moved all-in. Kitai folded and its onto the next hand.

Hand #211: Vayo limped in from the button, Kitai checked and the dealer fanned out the

flop. Both players checked, the dealer placed the

completed the board, Kitai bet 450,000 and Vayo quickly called.

and Kitai said “seven” and mucked his hand.

Hand #212: Kitai called from the big blind / button and Vayo cheked. The

was the turn card and both players checed.

Hand #214: Kitai completed on the button, Vayo checked and the flop came

Hand #206: Davidi Kitai moved all in from the button and Gordon Vayo looked at one card and called off for 880,000.

"I swear to god I only looked at one," Vayo said in shock when he turned over his mystery card to reveal pocket aces.

Vayo was in a dominating position, but his confidence disappeared when the

flop delivered the ultimate sweat as Kitai picked up the nut flush draw. The crowd was on its feet and held their collective breath as the dealer burned and turned the

Vayo successfully dodged a heart, but he had to do it one more time to stay alive. The river was red, but fortunately for Vayo it was the safe

and he was awarded the double.

Hand #196: Gordon Vayo folded the button and Davidi Kitai helped himself to some free chips.

Hand #197: Kitai moved all-in from the button and Vayo relinquished his hand.

Hand #199: Kitai raised all in and Vayo mucked his hand.

Hand #205: Vayo called on the button, Kitai took a look at his hole cards and checked from the big blind. The

flop was checked by Kitai, Vayo bet 130,000 and Kitai called. The turn was the

completed the board, Kitai bet 120,000 on the river and Vayo raised to 335,000. Kitai moved all-in and Vayo went into the tank for more than three minutes before folding.