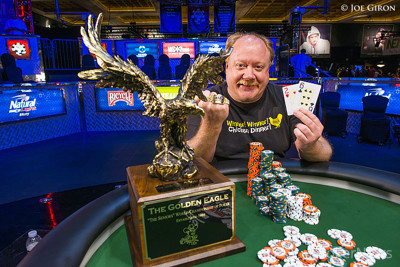 Dan Heimiller was among the bigger stacks out of the 32 players returning to the tables for Day 3 of the record-breaking Event #17: $1,000 Seniors No-Limit Hold'em Championship at the 2014 World Series Of Poker. With an original field size of 4,425, this event was no short feat of accomplishment for Heimiller, who ultimately emerged victorious after almost 10 hours of play on Sunday.

The Las Vegas poker pro collected a career-high payday of $627,462 and his second gold bracelet.

When the field got down to 10 players, David Smith went down to as low as one and a half big blinds before making a chip-and-a-chair comeback to enter the official nine-handed final table third in chips. Then, Michael Frederick lost a flip with the

to set the stage for the official final table.

Heimiller lost the lead straight away after Donald Maas doubled up through him, and then iIn Hand #11, Jim Custer could not improve with the

and finished in ninth place. David Vida followed only eight hands later and Doc Barry busted on Hand #22 after being previously crippled by Anthony Wise.

From there, it took only two more hands to reduce the field to five when David Tran lost the coin flip with the

. Dennis Phillips finished second to Allyn Jaffrey Shulman in 2012 and he would have to settle for fifth this time after four-bet shoving with the

of Maas. Exactly one hand later, Anthony Wise hit the rail in fourth place, which led to three-handed play carrying on for two hours.

Both Heimiller and Maas put a lot of pressure on short stack David Smith, and the latter then bowed out on Hand #122 after losing a flip.

Heimiller started the heads-up match with a 3-1 lead, and it only took six hands to determine the winner when Heimiller flopped a straight to send Maas out the door in second place.

Congratulations to all of the winners from the record event, and especially to Dan Heimiller for becoming the 2014 WSOP Seniors Championship champion. 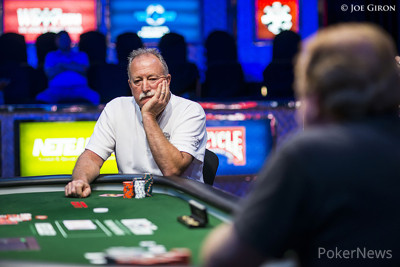 Donald Maas completed the blind on the button and Dan Heimiller checked his option in the big blind.

completed the board. There was a bet of 300,000 from Heimiller and Mass moved all in.

Heimiller instantly called and flipped over the

for the flopped straight.

Mass couldn’t beat it and he finished the tournament in second place making Heimiller the winner.

The players have been sent into a five minute break to set up the table for heads up play. 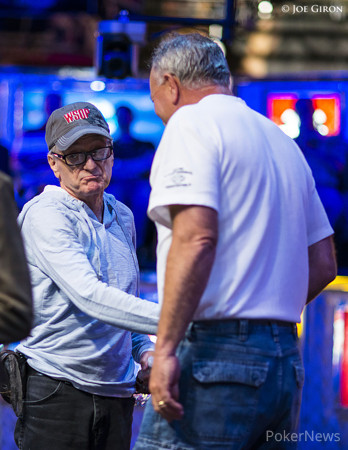 Hand #122: Ronald Maas limped, Dan Heimiller filled up in the small blind and David Smith moved all in from the big blind. Maas quickly folded, but Heimiller took longer for his decision. He did make the call!

board bricked and Smith has been eliminated in third place for a payday of $279,412.

Hand #115: Dan Heimiller limped the small blind. David Smith moved all in from the big blind and Heimiller folded.

and both checked to see the turn

. Checked again to the river

flop and Dan Heimiller took down the pot with a bet.

Hand #113: Smith moved all in and neither opponent called.