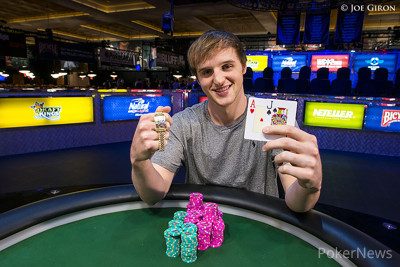 At the start of Tuesday, 10 players had (basically) an equal shot at a gold bracelet in Event #20: $3,000 No-Limit Hold’em Shootout. Three players - Taylor Paur, Chris Bell, and Phil Galfond – were looking for their second bracelet, but it was Kory Kilpatrick who topped them all, capturing his first piece of World Series of Poker gold.

Kilpatrick, a Georgia native, bested Eric Wasserson heads up to earn $254,891 and the title. He now has nearly $700,000 in career live tournament earnings, and this is his largest score by nearly double. In 2013, Kilpatrick finished third in a Hollywood Poker Open event in Lawrenceburg, earning $129,641. This marks his first live tournament win.

The runner-up finish for Wasserson was also his largest live score. The Pennsylvania cash game pro earned $157,490 for second place, and now has nearly $400,000 in career live tournament earnings.

Wasserson delivered several bad beats at the final table – cracking kings with ace-queen, and ace-king with ace-jack – and on the final hand he was once again dominated, this time by Kilpatrick. Kilpatrick’s

as the board ran out

Paur, Galfond, and Bell all fought valiantly for what would have been their second WSOP gold bracelet, but they were all eliminated consecutively in seventh, sixth, and fifth places respectively. Paur ran pocket eights into Noah Bronstein’s pocket jacks; Galfond’s ace-four suited was dominated by Jack Duong’s ace-jack suited; and Bell’s ace-queen was dominated by Wasserson’s ace-king. In all of those all-in hands, the superior hands held up.

Over three hours lapsed before there was an elimination at the final table. Narenda Banwari found himself with a short stack, and he lost a race with pocket sevens against Duong’s ace-jack suited. Another three-and-a-half hours passed before Dylan Linde busted in ninth place – Wasserson cracked his kings – and not long after Michael Stonehill lost a race to Duong and exited in eighth place.

Two hands after Bell was eliminated in fifth place, Duong busted in fourth. He moved all in on a completed board of

, and Kilpatrick snap-called with

. Duong revealed that he had a straight with

, and was off to the cage to get paid.

Bronstein held the chip lead at one point during the final table, and tripled up with aces when he became the short stack during five-handed play, but was unable to extend his run past third place. He moved all in for 20 big blinds or so with pocket fives and was racing against Kilpatrick’s ace-eight off-suit. The turn card was an eight, and Bronstein was sent packing.

*Every player at the final table was American

That does it for our coverage of Event #20 of the 45th-annual World Series of Poker, but stay tuned as we offer coverage for every single bracelet event. Until next time, good night from Las Vegas! 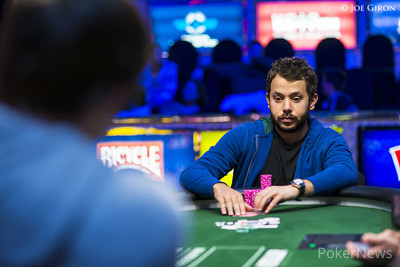 Kilpatrick had Wasserson dominated, and remained ahead after the

turn. Wasserson stood up from his chair, readying his things to exit the Mothership, and Kilpatrick looked up at him.

"Don't you walk away," he said, smiling.

on the river was no help to Wasserson, and he was eliminated in second place. He's off to the cage to collect $157,490, while Kilpatrick will take home $254,891 along with his first WSOP gold bracelet. 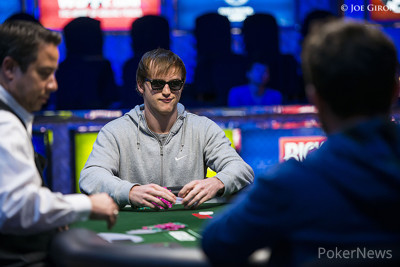 Hand #242: Kilpatrick raised to 60,000 on the button, Eric Wasserson defended his big blind, and the flop came

Hand #244: Kilpatrick limped in on the button, Wasserson checked, and the flop was all clubs;

, Wasserson tossed out a min-bet, and Kilpatrick called. The river was the 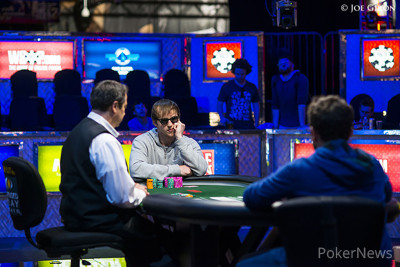 , Wasserson led out for what looked like 300,000 or so, and Kilpatrick instantly folded.

Hand #239: Wasserson limped in on the button, Kilpatrick checked, and the flop came

. Kilpatrick check-called a bet of 30,000, and both players checked on the turn (

). Kilpatrick won the pot with

, Wasserson led out for 125,000, and Kilpatrick called. The dealer burned a card then delivered the

on the turn. Wasserson quickly checked, Kilpatrick placed 325,000 in front of him, and Wasserson unhappily folded. 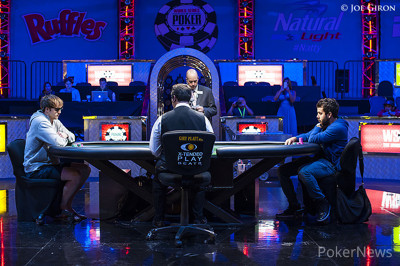 Hand #233: Eric Wasserson min-raised to 60,000 on the button, Kory Kilpatrick called, and the flop fell

, Kilpatrick quickly checked, and Wasserson knuckled behind. The

completed the board, Kilpatrick led for 85,000, and Wasserson quickly called.

for king-high, which was no good against Wasserson's

for jacks and sevens.

Hand #237: Wasserson raised to 60,000 with the button, Kilpatrick defended, and the dealer fanned

, the two checked again, and the

completed the board. Both players cheked again, and Kilpatrick won the pot with