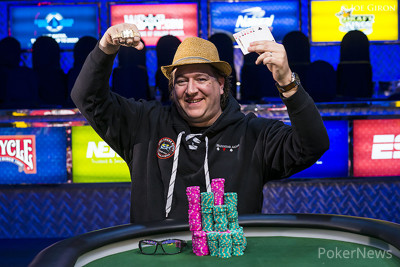 That does it from the ESPN Main Stage! After a long, grueling day of poker, the returning field of 21 runners has been whittled down to one champion. The last man standing is Christopher Wallace, who laid claim to his first gold WSOP bracelet as well as $507,614 in first-place prize money.

The day began with 21 hopefuls returning to the felt and vying for a spot at the final table of this prestigious event. With the limits constantly increasing, the eliminations came at a more and more rapid rate. Players like Ben Yu (20th), Daniel Negreanu (18th), Bertrand Grospellier (16th), current WSOP Player of the Year points leader Justin Bonomo (15th), Nick Schulman (14th), David Benyamine (11th), and Nick Kost (10th) all fell before the final table was reached. Bruno Fitoussi came into the unofficial final table as the shortest stack and was eliminated quickly by Lee Goldman during an Omaha 8 hand.

Calvin Anderson was the first player to fall at the official final table, his stack crippled during a Bill Chen triple up. Anderson busted soon after when he couldn't catch up against Max Pescatori's two pair in stud. Despite the aforementioned triple, Chen was the next player to go. Chen's demise came during a round of limit hold'em, moving most of his stack in before the flop against Wallace. Chen flopped top pair on an all-diamond board and fired a bet on the flop and turn before finding himself all in and at risk. Wallace held the

and made the nuts with a fourth diamond on the river, though, and Chen was sent packing in seventh place.

Lee Goldman was the next to go, finding elimination during the next round of razz. Goldman couldn't catch up against Richard Sklar and was forced to settle for a sixth place finish. Goldman collected $84,844 in prize money for his finish. Following Goldman out the door was Pescatori, who was eliminated one round of games later in razz. By the end of Pescatori's final hand, Randy Ohel held a jack-perfect and Pescatori squeezed out his final card with hopes to improve. He ultimately could not beat the jack and was sent to the rail in fifth place.

Wallace and Sklar performed a one-two punch on Richard Ashby, with the former crippling the Brit in a key stud 8 hand. Soon after, the short-stacked Ashby moved all in on third street against Sklar. Both players admittedly held weak hands, but it was ultimately Sklar who finished with the best of it. Ashby was eliminated in fourth place and took home $150,625 in prize money.

Sklar, who began the day as the shortest stack of the returning 21, clung to hope and found some fortunate spots early to pad his stack. From there he rode his rush and came into the final table as the chip lead. Despite holding that lead for a majority of the final table, Sklar lost some key pots during three-handed play and was eliminated in third place. Sklar fell by Ohel's hand during an Omaha 8 hand, allowing him to pocket $206,499 in prize money.

Wallace and Ohel began heads up play nearly dead even in chips, but with only 30 big bets in play between the two, the action was constantly being pushed. Eventually, Wallace pulled in a massive stud hand, making sixes full of tens to take an almost 5-1 chip lead. From there, Wallace leaned on Ohel until the latter fell during a stud 8 confrontation. Ohel became the runner-up and collected $313,715 while Wallace was crowned the 22nd champion of the 2014 WSOP!

PokerNews extends its congratulations to Wallace for claiming one of the most coveted bracelets of the summer. That does it for our coverage of Event 22, but be sure to check out our Live Reporting page for all of the latest from every other event of the 2014 World Series of Poker! 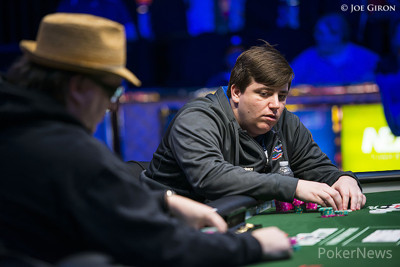 On the final hand of the tournament it was Randy Ohel who had the chip lead and Christopher Wallace completed. Ohel called and on fourth street he called another bet. On fifth Wallace bet again, Ohel raised and Wallace put his opponent all in. Ohel called.

Ohel hit an ace on sixth to jump in front but Wallace filled up on the river so that his full house sealed the deal! Ohel put up a great fight and was close to victory, but ultimately it's Wallace who walks away with the top prize and the title! 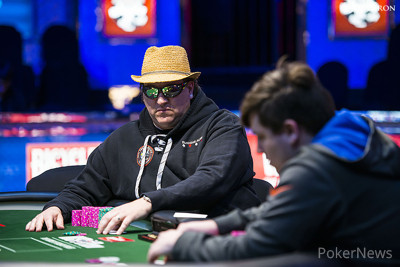 Christopher Wallace was the bring in. Randy Ohel completed and Wallace called to see fourth street. Ohel fired out a bet on fourth and Wallace stuck around. The same happened on fifth and the two were off to sixth.

"Oh god damn it," said Ohel. "You have seven-nine. Are you raising with trips again? Because I can beat trips. Alright. I call."

. Ohel mucked his hand and Wallace dragged in the huge pot. He's now sitting on 4.9 million to Ohel's 1.1 million.

On seventh street both players checked.

and that was enough to take down this pot.

On sixth street, Ohel had four to the wheel showing and led out once more. Wallace instantly folded and Ohel was pushed the pot. 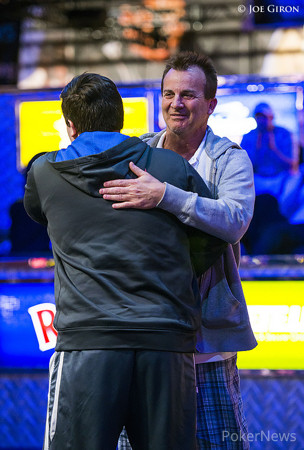 Richard Sklar had been on the short end for a while when Randy Ohel raised from the button in Omaha 8. Sklar three-bet, Ohel four-bet and Sklar moved all in. Ohel called and the cards were turned face up.

and Sklar was knocked out in third place after an amazing run he takes home $206,499.

Randy Ohel raised from the small blind and Richard Sklar called out of the big blind. The two saw a flop of

and Ohel continued with a bet. Sklar announced a raise and Ohel came along for the ride. The

turned and Ohel led into the raiser with a bet. Sklar sighed, picked his hand up, and tossed it into the muck. Sklar is now down around 450,000 in chips while Ohel sits on 2.95 million.

Richard Sklar raised from the button and Christopher Wallace made it three bets from the small blind. Action folded back to Sklar and he tagged along. The flop came down

and Wallance came out firing. Sklar called and the

put two pair on the board on the turn. Wallace fired again but this time Sklar opted to kick his cards in. Wallace was pushed the pot and now has about 2.1 million in chips.